You are here: Home › News › Researchers Investigate Giant Sperm Paradox
By Will Parker on June 13, 2006 in News 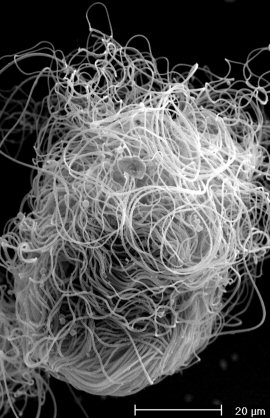 Adam Bjork and Scott Pitnick of Syracuse University have been getting down and dirty with sexual selection again. Following on from theirbig bat testicle research, the two say that they have discovered a major conundrum in the area of evolutionary biology. In their article in Nature, Bjork and Pitnick discuss the paradox they discovered within the foundations of sexual selection theory as it relates to the sperm and egg production of Drosophila (fruit flies).

Past work from Pitnick showed that post-copulatory sexual selection on males (the sperm competition that takes place after females mate with more than one male) can lead to decreased sperm quantities by favoring the production of larger sperm. In other words, their production moves toward a “quality, not quantity” mode, because female fruit flies have evolved so that longer sperm have a greater chance of successfully fertilizing eggs.

This leads to the “big sperm paradox” because the idea that post-copulatory sexual selection could favor the evolution of giant sperm clashes with traditional sexual selection theory, which predicts that the most successful sperm competitors will be the males that produce many, tiny sperm. As males evolve to produce larger – and therefore fewer – sperm, eggs become less rare, and sexual selection should weaken, according to theory. Known as “isogamy” (where males and females have equal investment per gamete when producing sperm and eggs), each sperm and each egg would have a chance to participate in a successful fertilization. In such a population, sexual selection would be extremely weak, as there would be little or no competition among males to fertilize eggs.

To investigate this clash between empirical data and traditional theory, Bjork and Pitnick set out to measure the strength of sexual selection in four Drosophila species of varying sperm length, ranging from the anisogamous D. melanogaster (in which a male produces 30 sperm in the time it takes a female to make one egg) to the nearly isogamous D. bifurca (where just six sperm are produced per egg). They found that, contrary to theoretical predictions, the level of competition among males did not decrease; the strength of sexual selection remained high as sperm size increased. Their results show that, once females evolve a preference for longer sperm, intense sperm competition can actually reverse the trajectory of sperm evolution so that the most successful males are those with the most female-like strategy of producing very few, large gametes.

The discovery brings into focus a question often pondered by evolutionary biologists. The animal kingdom is full of sometimes odd features in male physiology, such as the ostentatious feathers of the peacock, presumably to attract the attention of females. But when all other criteria are equal, and when one female mates with a number of males, what causes females to “choose” whose sperm succeeds in fertilizing her eggs? It’s what Bjork and Pitnick call “cryptic female choice.”

Much of the research focused on the sperm of Drosophila bifurca; an impressive six centimeters. The researchers explained that the female of the species had evolved to favor this long sperm because they developed long reproductive tracts in which longer sperm have the greatest chance at competitive fertilization success. “The sperm of Drosophila bifurca is 20 times longer than the male that produces it,” says Bjork. “To put that into perspective, if humans made sperm that long and you took a six-foot man and stood him on the goal line of a football field, his sperm would stretch out to the 40-yard line.”

The evolution of giant sperm is puzzling, says Bjork: “Until recently, it was widely believed that selection generated by sperm competition favors males that manufacture the smallest gametes possible in order to maximize sperm number. In essence, sperm competition is attributed with the evolutionary maintenance of anisogamy. I became interested in understanding whether the very act of sexual selection, by definition, can limit its own ability to act.”

The next step is to investigate the effects of sperm length evolution on the intensity of sexual selection. “For instance, our results indicate that, as sperm get longer across and within species, females actually become more ‘male-like,'” said Bjork. “The intensity of sexual selection on females increases. Traditionally, females have been thought to have the same number of progeny whether they mate once or, say, five times because there are way more than enough sperm to fertilize all of their available eggs. But our data show that, as sperm get longer, females actually benefit, in terms of increased offspring numbers by multiplying mating.”

UCLA Announces Breakthrough In Protein Engineering
Trauma The Major Cause of Schizophrenia?