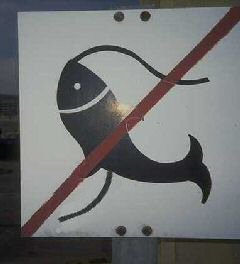 How much do females really care about their mate’spenis size? A new study has shown that for some fish species, females prefer males with larger sexual organs, and actually choose them for mating. But biologist Brian Langerhans, from Washington University in St. Louis, said that this does not exclude males with an average-sized sex organ, called a gonopodium, as these fish can out-swim the larger-endowed males in a predator-laden environment.

Langerhans said that the fish with smaller genitalia have a faster burst speed than the males with larger genitalia, who lose out because the size of their organ slows them down, making them ripe for capture by larger fish. “A male with a larger gonopodium has a higher chance of mating, but in a predator environment he has a higher probability of dying,” Langerhans said. “That’s the cost, the tradeoff. On the other hand, we found that in predator-free environments gonopodia size was larger, as there is minimal cost for large genitalia in that environment. Bigger is better for mating, but smaller is better for avoiding predation.”

Langerhans study, appearing in the Proceedings of the National Academy of Sciences, looked at mosquitofish (guppy-like fish, about an inch long) and found that female mosquitofish spend 80 percent more time with males who have larger genitalia. “A male with a larger gonopodium has a higher chance of mating, but in a predator environment he has a higher probability of dying,” Langerhans said. “That’s the cost, the tradeoff. On the other hand, we found that in predator-free environments gonopodia size was larger, as there is minimal cost for large genitalia in that environment. Bigger is better for mating, but smaller is better for avoiding predation.”

Male genitalia are more variable than just about any other body form studied, and a significant number of evolutionary biologists study this field as genital shape (morphology) is one of the chief characteristics that taxonomists use to distinguish between closely related species. Researchers have thought for about 20 years that the striking diversity of genital form results from post-mating sexual selection, such as sperm competition or cryptic female choice. That is, most evolutionists have believed that selection acting within the female’s body that biases fertilization toward males with a particular genital morphology has been largely responsible for the generation of genital diversity. Langerhans’s finding, however, contradicts that theory as he has shown that female mosquitofish make their choice before mating, and that choice is made with genital size being the deciding factor.

Langerhans examined the mating preference of about 50 mosquitofish females, where each female was placed in an aquarium having two videos playing side-by-side at one end of the aquarium. One video was of a male mosquitofish with an average gonopodium; the other was of a male with a 15 percent larger one. This forced a female to make a pre-mating sexual selection. After testing each individual and devoting over 1,000 minutes of observation, Langerhans found that it wasn’t even close. “They chose the larger one over and over,” Langerhans said. “All females had the same preference.”

Historically, genitalia were not believed to be subject to such sexual selection. “Male genitalia can be seen as just another morphological character, and if you think of them that way, females might be choosing just as they would for any morphological trait,” he said. “This at least partially explains the variability in male genital morphology.” Langerhans is now moving on and exploring the role of genital divergence in the process of speciation. Divergence in a copulatory organ might be especially important in speciation – owing to its obvious link to reproduction, which largely defines species boundaries. Evolutionary changes in male genital morphology between populations may result in reproductive incompatibility when populations merge again in the future, resulting in the generation of new species.