You are here: Home › News › MINOS Project Detects Ghostly Particles Changing “Flavor”
By Will Parker on April 3, 2006 in News 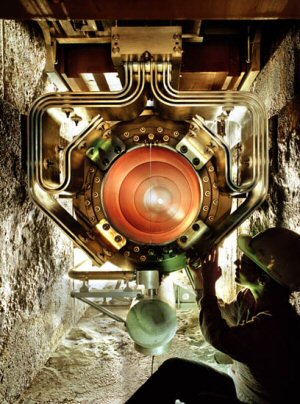 In an experimental first, an international team of scientists has managed to observe the all but massless neutrino particle transform from one “flavor”, or type, to another. The researchers say that their observations may better our understanding to how galaxies were formed and even explain the origin of the particles that comprise all matter in the universe.

For 50 years scientists have been scratching their heads pondering the question of how the relatively massless structure of the neutrino manages to change “flavors” (electron, muon and tau), and how they could be so fundamental to the formation of the universe.

The project involved shooting a high-intensity beam of the ghost-like muon neutrino particles between two huge detectors positioned 450 miles apart – one at the Fermilab site in Batavia, Illinois, and the other in Soudan, Minnesota. When in full swing, the Fermilab beam line is capable of generating and transporting a package of 20,000 billion protons every two seconds to a graphite target that converts the protons into exotic particles like kaons and pions. As the beam travels toward its destination, the particles decay and produce muon neutrinos needed for the MINOS experiment. The beam emitted is conical in shape and is focused and directed using a set of two special lenses, called horns.

Scientists chose the 450-mile long distance because they figured it would increase the probability of oscillation occurring, and optimize the chance of witnessing the neutrino “flavor change”. The MINOS “near” detector analyzes the neutrino beam as it heads off, with the MINOS “far” detector – housed half a mile underground – analyzing the beam as it arrives. Because of their near massless form, the neutrino beam doesn’t need to be fed through a tunnel of any sort; they’re capable of passing right through the Earth to the Minnesota detector.

The neutrino’s ability to pass right through solid objects is usually what makes them so difficult to detect, but using the MINOS detectors, scientists observed that 85 of the 177 muon neutrinos expected to arrive at Minnesota had gone AWOL. The team says that the muon neutrino disappearing act is consistent with an effect known as neutrino oscillation, where the neutrinos could have changed into electrons or tau neutrinos. The experiment shows that neutrinos do indeed have mass, however small, in order to be able to oscillate. “This is a milestone of the progress in this field,” Barnes exclaimed.