You are here: Home › News › Solar flares spookily linked to radioactive decay on Earth
By Will Parker on August 26, 2010 in News 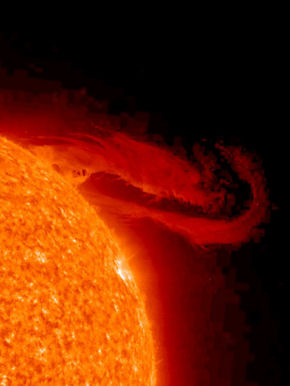 Researchers from Stanford and Purdue University have found that the radioactive decay of some elements sitting in laboratories on Earth seems to be influenced by activities inside the sun, 93 million miles away. This finding, they speculate, may provide evidence for a previously unknown particle emitted by the sun.

Around the world, students are taught that the rate of decay of a specific radioactive material is a constant. This concept is relied upon, for example, when anthropologists use carbon-14 to date ancient artifacts. But that assumption was challenged by a group of researchers from Purdue University who at the time were more interested in random numbers than nuclear decay.

Purdue’s Ephraim Fischbach was looking into the rate of radioactive decay of several isotopes as a possible source of random numbers. As the Purdue researchers pored through published data on specific isotopes, they found disagreement in the measured decay rates – odd for supposed physical constants.

Checking data collected at Brookhaven National Laboratory and the Federal Physical and Technical Institute in Germany, they came across something even more surprising: long-term observation of the decay rate of silicon-32 and radium-226 seemed to show a small seasonal variation. The decay rate was ever so slightly faster in winter than in summer.

Was this fluctuation real, or was it merely a glitch in the equipment used to measure the decay, induced by the change of seasons, with the accompanying changes in temperature and humidity? “Everyone thought it must be due to experimental mistakes, because we’re all brought up to believe that decay rates are constant,” said Stanford’s Peter Sturrock, a professor emeritus of applied physics and an expert on the inner workings of the sun.

But a series of papers published in Astroparticle Physics, Nuclear Instruments and Methods in Physics Research and Space Science Reviews, shortly thereafter showed that the observed variations in decay rates were highly unlikely to have come from environmental influences on the detection systems.

Then, on Dec 13, 2006, the sun itself provided a crucial clue, when a solar flare sent a stream of particles and radiation toward Earth. Purdue nuclear engineer Jere Jenkins, while measuring the decay rate of manganese-54, a short-lived isotope used in medical diagnostics, noticed that the rate dropped slightly during the flare, a decrease that started about a day and a half before the flare.

The decay-rate aberrations that Jenkins noticed occurred during the middle of the night in Indiana – meaning that something produced by the sun had traveled all the way through the Earth to reach Jenkins’ detectors. What could the flare send forth that could have such an effect?

Jenkins and Fischbach guessed that the culprits in this bit of decay-rate mischief were probably solar neutrinos, the almost weightless particles famous for flying at almost the speed of light through the physical world – humans, rocks, oceans or planets – with virtually no interaction with anything.

Their findings strengthened the argument that the strange swings in decay rates were caused by neutrinos from the sun. The swings seemed to be in synch with the Earth’s elliptical orbit, with the decay rates oscillating as the Earth came closer to the sun and then moving away.

But could this hypothesis be proved? Stanford’s Sturrock suggested the Purdue researchers look for evidence that the changes in radioactive decay on Earth vary with the rotation of the sun.

Going back to take another look at the decay data from the Brookhaven lab, the researchers found a recurring pattern of 33 days. This was surprising, given that most solar observations show a pattern of about 28 days – the rotation rate of the surface of the sun. The explanation? The core of the sun apparently spins more slowly than the surface. “It may seem counter-intuitive, but it looks as if the core rotates more slowly than the rest of the sun,” Sturrock explained.

Fishbach says all of the evidence points toward a conclusion that the sun is “communicating” with radioactive isotopes on Earth. But no one knows how neutrinos could interact with radioactive materials to change their rate of decay. “It doesn’t make sense according to conventional ideas,” Fischbach said.

Jenkins perhaps summarized the paradox best, noting that, “What we’re suggesting is that something that doesn’t really interact with anything [neutrinos] is changing something that can’t be changed [radioactive decay rates].”

If the mystery particle is not a neutrino; “It would have to be something we don’t know about, an unknown particle that is also emitted by the sun and has this effect, and that would be even more remarkable,” said Sturrock.