You are here: Home › News › Neutrino Boogie Upsets Standard Model
By Will Parker on July 9, 2004 in News 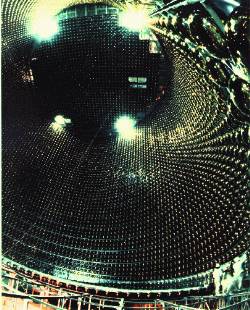 “These findings show that the Standard Model needs to be modified to better explain the fundamental forces that make up all matter,” says James Stone of Boston University. “They clear the field of all other explanations for the earlier results.” Stone is part of the Super-Kamiokande collaboration, a project based in Japan that involves researchers from more than 30 institutions worldwide. Stone serves as co-principal investigator for the “Super-K” experiment. The results of the collaboration’s efforts will be published next month inPhysical Review Letters.

The Super-K group first reported that neutrinos oscillated in 1998. This discovery grew from their observation that the number of upward-going muon-neutrinos (those traveling the full distance through Earth) was considerably fewer than the number of downward-going muon-neutrinos (those that traveled only the “short” distance from the upper atmosphere to the underground Super-K detector). In their report, the researchers show that the size of the measured difference depends on the distance traveled in a way that is consistent with the theory of neutrino oscillation. Their full analysis of the data shows the muon-neutrino most likely changes into a third flavor of neutrino, the tau-neutrino, which is not produced in cosmic-ray collisions.

The Super-K physicists devised a new method for this analysis of atmospheric neutrino data, one that used only those neutrino “events” that had very good measurements of travel distance and neutrino energy. In the 1998 analysis, the distinctive oscillatory pattern had been washed out because many of the events had poor travel distance and neutrino energy measurements. In this newly reported analysis, each selected event was assigned a well-defined L and E value, and the number of neutrino events was studied as a function of the ratio L/E. Analysis of data gathered using this improved technique shows a prominent dip at a value of L/E that is consistent with the theory of neutrino mixing.

Theoretically, neutrinos can change from one flavor to another only if they have mass. The Standard Model, however, assumes neutrinos are without mass. Thus, the 1998 discovery of neutrino oscillation was also the first evidence that neutrinos have mass. A few unusual theories, however, had offered explanations for the “loss” of upward-going muon neutrinos that differed from the 1998 conclusion of the Super-K group. Instead of determining that the deficit indicated that muon-neutrinos changed to a new flavor, these theories noted that the deficit was likely the result of neutrino decay to other particles.