You are here: Home › News › Satellite Provides Spectacular New Volcanic Images
By Will Parker on November 25, 2005 in News 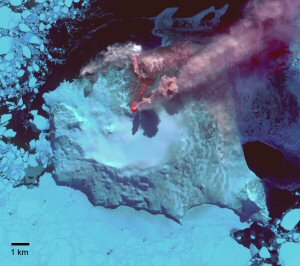 Researchers from the British Antarctic Survey (BAS) only became aware of the new eruption after seeing the satellite images. The images show a large and fast flowing lava flow that is pouring into the sea like a huge waterfall. “Red hot lava has formed a molten river 90 metres wide that is moving fast, possibly several metres per second, and extending the shoreline on the north side of the island. This event is special because Montagu Island is mostly ice covered and it’s very rare that we get to make direct observations of eruptions under ice sheets,” said BAS researcher Dr John Smellie, a leading authority on volcanoes.

The South Sandwich Islands are what vulcanologists call a volcanic arc. They are of interest to researchers because of their remoteness from any continental landmass, making the lavas ‘pristine’ – unaffected by continental contamination. Such volcanic areas may help reveals how the Earth’s crust was formed and how it will evolve over time. Studying erupting volcanoes by satellite, particularly those in remote regions, is also of interest in atmospheric research because the gases they release can be compared to man-made emissions.

Dr Smellie intends to get there for a first hand look as soon as possible. He plans to fly over the volcano in the New Year to get more close-up views for his research. “My work usually involves studying Antarctic rock formations to find out how past eruptions affected the growth and retreat of ice sheets over the last 30 million years. This opportunity to monitor a live eruption and see how it affects ice cover is priceless,” he said.