You are here: Home › News › New Slant On Volcanic Climate Change
By Will Parker on June 13, 2005 in News 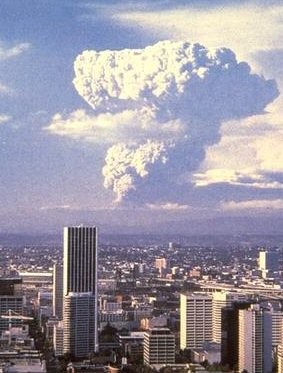 Scientists have known for some time that airborne volcanic particles (aerosols) can reflect the Sun’s rays back out into space and cool the planet for relatively short periods. But now, British scientists have discovered another cooling mechanism triggered by volcanic activity that has the potential to cool the Earth for much longer periods. Vincent Gauci, Nancy Dise and Steve Blake of the Open University have been studying a simulation of one of Europe’s largest eruptions, the Icelandic Laki eruption of 1783, which caused widespread crop damage and deaths around Europe. “Our findings show that volcanic eruptions have another, more indirect, effect: the resulting sulfuric acid from the volcano helps to biologically reduce an important source of atmospheric greenhouse gases. At the extreme, this effect could cause significant cooling for up to 10 years or more,” said Gauci.

The study, published in Geophysical Research Letters, looks at the effects of the massive sulfur dioxide output usually associated with volcanic eruptions. “The amount of sulfur dioxide put out by Laki in nine months was ten-times more than the amount that now comes from all of western European industrial sources in a year. That would have caused a major natural pollution event,” said Steve Blake. The researchers found that such eruptions create a microbial battleground in wetlands, with sulfate-reducing bacteria suppressing the microbes that would normally produce the powerful greenhouse gas methane. The sulfate-loving bacteria are “victorious” over the microbes producing methane, leading to a cooling effect. “We did the simulation on a peat bog in Moray in northeast Scotland; an area we know was affected by the volcanic fallout from the Laki eruption and found that the reduced methane emission lasts several years beyond the end of the acid rain. Our calculations show that the emissions would take many years to recover – far longer than volcanoes are currently understood to impact on the atmosphere,” Gauci added.

The researchers now think that volcanoes may exert a more powerful influence over Earth’s atmosphere and climate than was previously thought. Volcanoes may even be a more important regulator of wetland greenhouse gases than modern industrial sources of acid rain. “Wetland ecosystems are the Earth’s biggest source of methane and many of these wetlands seem to be located in volcanically active regions such as Indonesia, Patagonia, Kamchatka, and Alaska. Even some wetlands that are quite far away from volcanoes, such as those in Scandinavia or Siberia, will be regularly affected by Laki-like pollution events from Icelandic eruptions” said Gauci.

Gauci added that there was a period of Earth’s pre-history when this effect may have created important climate changes. “This interaction may have been particularly important 50 million years ago, when the warm greenhouse climate of the day was due, in large part, to methane from the extensive wetlands that covered the Earth at that time. During that time, large volcanic eruptions could have been real agents of rapid climate change due to this mechanism.”

The research also points to a long recovery period for ecosystems that have experienced man-made acid rain. “We’ve been getting on top of the sulfur pollution problem in Europe and the U.S. for a long time now. Our findings show, however, that the effects of acid rain can still linger for a long time,” concluded Gauci.