You are here: Home › News › Orphan Black Hole Puzzles Astronomers
By Will Parker on September 15, 2005 in News 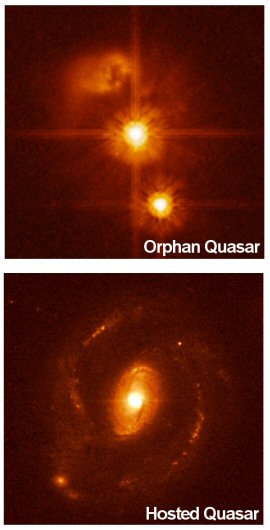 Quasars are the brightest objects in the Universe, spewing out enormous amounts of energy making them visible across vast distances. Astronomers have long believed that quasars are in fact super-massive black holes, sitting in the middle of galaxies, sucking in surrounding matter and then emitting radiation. Previous observations of quasars have supported the theory that they are always associated with massive host galaxies, but a newly observed “orphan” quasar, reported in Nature, seems to contradict this theory.

A team of astronomers using the Hubble Space Telescope (HST) and the ESO Very Large Telescope (VLT) located the cryptic stellar object while conducting a detailed study of twenty low red-shift quasars. Nineteen of these objects where observed to be surrounded by a host galaxy but in one quasar – dubbed HE0450-2958 – there was no evidence of an encircling galaxy. Could it be a previously undiscovered case of a far more exotic object harboring a very massive black hole?

But in the case of HE0450-2958, no host galaxy was detected. “With the data we managed to secure with the VLT and the HST, we would have been able to detect a normal host galaxy”, said Pierre Magain, lead author of the findings. “We must therefore conclude that, contrary to our expectations, this bright quasar is not surrounded by a massive galaxy.”

What the astronomers did find, just besides the quasar, was a bright cloud about 2,500 light-years in size, which they baptized “the blob”. The VLT observations indicate this blob could be composed of gas ionized by the intense radiation coming from the quasar. The astronomers speculate that it is probably this blob of gas that is feeding the super-massive black hole, allowing it to become a quasar. The imagery also indicates a strongly distorted galaxy, showing all the signs of a recent collision, about 50,000 light-years away. The VLT spectra show it to be in a state where it is forming stars at a frantic rate. “The absence of a massive host galaxy, combined with the existence of the blob and the star-forming galaxy, lead us to believe that we have uncovered a really exotic quasar, says team member Frédéric Courbin. “There is little doubt that a burst in the formation of stars in the companion galaxy and the quasar itself have been ignited by a collision that must haven taken place about 100 million years ago. What happened to the putative quasar host remains unknown.”

The astronomers admit that interpreting the observations is a challenge. One intriguing hypothesis is that the galaxy harboring the black hole is made almost exclusively of dark matter. “Whatever the solution of this riddle, the strong observable fact is that the quasar host galaxy, if any, is much too faint”, concluded team member Knud Jahnke.