You are here: Home › News › Adenovirus Vaccine May Be Key To Beating Bird Flu
By Will Parker on September 14, 2005 in News 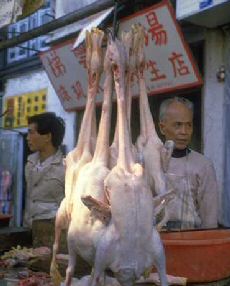 While the World Health Organization nervously waits for the first confirmed cases of human-to-human transmission of the H5N1 “bird flu” virus, researchers are ramping up their efforts to design more efficient vaccines.

Molecular virologist Suresh Mittal, from Purdue University, is investigating a new way to provide broader immunity against multiple strains of the avian influenza virus. Mittal and his colleagues are focusing on using a harmless virus, called adenovirus, as a transmitting agent for a vaccine.

The problem with current vaccines is that they are designed for specific strains of flu and are effective only as long as the virus doesn’t change form. This means existing vaccines will have limited success against new strains of avian influenza as they emerge. Compounding the problem is the achingly slow production methods used for current vaccines.

All of today’s flu vaccines use proteins grown in fertilized chicken eggs. It usually takes months to produce a new vaccine for a new virus strain using this method and vaccine production can be constrained due to egg shortages. “Do we still want to depend on the egg to make our flu vaccines?” Mittal said. “When these types of viruses strike humans, they also strike poultry. In that case, the availability of fertilized eggs to make enough vaccine will be compromised.” The CDC, World Health Organization and NIAID admit that with current methods, it would be difficult to rapidly produce enough protective medication to stem a pandemic. But according to Mittal, a large quantity of an adenovirus-based vaccine could easily be produced on short notice.

“Our approach is to use an adenovirus to deliver some components of the bird flu virus in a vaccine formulation,” explained Mittal. “We already know how to grow large amounts of adenovirus and how to purify it because adenoviruses already are used in clinical trials for gene therapy as vectors.”

That may prove to be more difficult. Viruses are classified according to the combination of two types of proteins found on the virus cell surface. The 15 types of hemagglutinin (H) protein and nine types of neuraminidase (N) protein form a large number of possible avian influenza viruses. New, sometimes more dangerous, flu strains develop when the H and N combinations change. When the genes from a human or swine influenza mix with an avian variety, one virus takes a piece of genome from another to fill an empty spot, thus a new strain of flu is born.

“Many people believe that this virus will mutate and become more widespread. The question is when? Are we prepared? We hope that successful completion of this project will result in development of an adenovirus-based vaccine effective against pathogenic avian influenza viruses,” Mittal concluded.