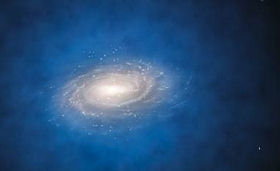 A study of the motions of stars in the Milky Way has found no evidence for the existence of dark matter in a large volume around the Sun. According to widely accepted theories, the solar neighborhood was expected to have dark matter – estimated to constitute 83 percent of the matter in the Universe – in relative abundance. But a new study by a team of astronomers at the European Southern Observatory’s La Silla facility in Chile has found that these theories do not fit the observational facts. Their analysis appears in The Astrophysical Journal.

The team based their findings on the motions of more than 400 stars up to 13,000 light-years from the Sun. From this new data they calculated the mass of material in the vicinity of the Sun, in a volume four times larger than ever considered before.

“The amount of mass that we derive matches very well with what we see – stars, dust and gas – in the region around the Sun,” said team leader Christian Moni Bidin, from the Universidad de Concepción, Chile. “But this leaves no room for the extra material – dark matter – that we were expecting. Our calculations show that it should have shown up very clearly in our measurements. But it was just not there.”

Dark matter is thought to be a substance that cannot be seen, but shows itself by its gravitational attraction for the material around it. It was originally theorized to explain why the outer regions of galaxies, including our own Milky Way, rotated so quickly.

Dark matter theory has continued to evolve, and it is now also an essential component of theories about galaxy formation. Today, it is widely accepted that this mysterious dark component constitutes the bulk of the mass in the Universe, despite the fact that it has resisted all attempts to understand its nature and all experiments to detect it have failed.

Moni Bidin explained that by measuring the motions of many stars, particularly those away from the plane of the Milky Way, the astronomers could work backwards to deduce how much matter was present. These motions, he explained, are a result of the mutual gravitational attraction of all material – both normal matter and dark matter.

Existing models of how galaxies form and rotate suggested that the Milky Way is surrounded by a halo of dark matter. Astronomers are not able to precisely predict what shape this halo takes, but they had expected to find significant amounts in the region around the Sun. Moni Bidin says that only very unlikely shapes for the dark matter halo – such as a highly elongated form – could explain the observations in the new study.

“Despite the new results, the Milky Way certainly rotates much faster than the visible matter alone can account for. So, if dark matter is not present where we expected it, a new solution for the missing mass problem must be found. Our results contradict the currently accepted models. The mystery of dark matter has just become even more mysterious,” Moni Bidin concluded.

Related:
Discuss this article in our forum
Modified Newtonian dynamic could do away with dark matter
Tantalizing hint of dark matter’s existence
THERES NO DARK ENERGY, AND NO DARK MATTER