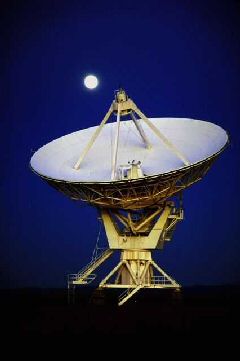 In an article appearing on the Astrophysical Journal Letters website, astrophysicists at Stanford report spotting a black hole that’s more than 10 billion times the mass of our sun. Its so far away that the researchers think it formed when the first stars and galaxies began to light up and it may provide a window into our cosmological origins.

“In cosmology, it turns out that ‘a galaxy a long time ago’ and ‘far, far away’ really do go together,” says Associate Professor Roger Romani, who with David Sowards-Emmerd, Professor Peter Michelson and Lincoln Greenhill, spotted the supermassive black hole, known as a ‘Blazar’. “In this case, we’re looking far enough away that it’s within a billion years of the origin of it all, the Big Bang.”

These gravity-powered sources are the most powerful sources in the universe.”

As black holes go, this one is a messy eater. Gobbling up its galaxy so quickly that not everything is making it down its throat past the point of no return – the event horizon – where not even light can escape gravity’s strongest pull. The matter that doesn’t make it past the event horizon is spewing back up in the form of accelerated high-energy particles. If a black hole amid a galaxy shoots out high-energy particles in narrow jets that just happen to be aimed at Earth, astrophysicists name it a ‘Blazar’. Distant blazars seem to dominate the gamma-ray sky and can obscure other objects of interest. Pulsars, spinning neutron stars nearby in our own galaxy, can also emit gamma rays, but far fewer of them are known. Romani, whose main interest is pulsars, wanted to identify and discard blazars so he could concentrate on the neutron stars.

“I got started working on the blazars as a way of culling the wheat from the chaff,” Romani says. “But then the chaff proved just as interesting.”

The co-authors have surveyed 200 blazars and they eventually hope to survey 2,000. The survey is in preparation for a mission planned for 2007. Led by Michelson, the researchers will use the Gamma Ray Large Area Space Telescope (GLAST) to study high-energy sources of radiation in the universe, such as supermassive black holes, merging neutron stars and hot streams of gas moving at nearly the speed of light.

“Something really new is waiting to be found in the gamma-ray sky,” Romani says. “If we could identify all the blazars, tag the pulsars – the things that are left over, that’s where the really new discoveries will be.”

Greenhill led the effort to obtain radio images of the blazar jet using the Very Long Baseline Array (VLBA). Funded by the National Science Foundation and operated by the National Radio Astronomy Observatory, the VLBA is essentially a radio camera. It consists of 10 dish antennas – 25 meters wide and distributed from Hawaii across the United States to St. Croix – slaved together with computers to create a composite image with a resolution Greenhill calls ”comparable to what they would get with a single antenna about as large as a continent.”

“It’s amazing to find something so interesting and unique in a relatively small survey,” says Sowards-Emmerd. “We immediately realized that a high-redshift blazar and gamma-ray source would allow us to test our understanding of relativistic radio jets and their interaction with the cosmic microwave background leftover from the Big Bang,” Greenhill says.

“It’s a searchlight that’s set so far away that it illuminates matter and radiation all the way between us, between time one billion years after the Big Bang and now,” Romani says. “If you can detect it with a gamma-ray telescope, you have a handle on the birth of stars and galaxies between then and now that you never had before.”

Scientists are curious about how a black hole could have gotten so big so fast. How do you take something big enough to hold 1,000 solar systems and as heavy as all of the stars in our Milky Way galaxy put together, and quickly crunch-collapse it? Scientists think the universe formed 13.7 billion years ago with the Big Bang. The distance of the blazar indicates it formed a billion years after that.

“What’s interesting about a billion years after the Big Bang is that this marks the end of the ‘Dark Age’,” Romani says. “The universe first formed with an enormous flash of light and heat – that’s the Big Bang – and then cooled off. And everything’s dark for about a billion years. And toward the end of that period, the first stars and black holes and galaxies start collapsing and forming and turning on. We talk about that as the end of the Dark Age. So it’s very interesting, and this is one of the big pushes in cosmology, to find objects back in the tail end of the Dark Age, when things are first lighting up, and then to use those to figure out how everything we have in the universe formed.”

In the next year, the scientists hope to use the VLBA to take a better picture of the jet detected with radio waves and then observe its X-ray spectrum. This will help illuminate the matter between the supermassive black hole and Earth, clarify the black hole’s size and characterize the jet’s material as it moves away from the black hole at nearly the speed of light.