You are here: Home › News › Fermi Telescope reveals new type of pulsar
By Will Parker on July 3, 2009 in News 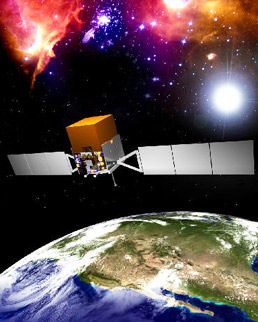 A new class of pulsar detected by NASA’s Fermi Gamma-ray Space Telescope is solving the mystery of previously unidentified radio-quiet gamma-ray sources. The report in Science describes 16 pulsars discovered by Fermi based only on their emissions of high-energy gamma rays. Previously, most of the 1,800 known pulsars were found through their periodic radio emissions.

“These are the first pulsars ever detected by gamma rays alone, and already we’ve found 16,” said University of California, Santa Cruz (UCSC) physicist Robert Johnson. “The existence of a large population of radio-quiet pulsars was suspected prior to this, but until Fermi was launched, only one radio-quiet pulsar was known, and it was first detected in x-rays.”

Johnson and other physicists at UCSC identified the gamma-ray pulsars using computational techniques they developed to comb through data from Fermi’s Large Area Telescope (LAT). Marcus Ziegler, corresponding author of the paper, said detection of gamma-ray pulsations from a typical source requires weeks or months of data from the LAT. “From the faintest pulsar we studied, the LAT sees only two gamma-ray photons a day,” Ziegler explained.

Of the 16 gamma-ray pulsars found, 13 are associated with unidentified gamma-ray sources detected previously by the EGRET instrument on the Compton Gamma-ray Observatory. EGRET detected nearly 300 gamma-ray point sources, but was unable to detect pulsations from those sources, most of which have remained unidentified. “It’s been a longstanding question what could be powering those unidentified sources, and the new Fermi results tell us that a lot of them are pulsars,” UCSC physicist Pablo Saz Parkinson said. “These findings are also giving us important clues about the mechanism of pulsar emissions.”

A pulsar emits narrow beams of radio waves from the magnetic poles of the neutron star, and the beams sweep around like a lighthouse beacon because the magnetic poles are not aligned with the star’s spin axis. If the radio beam misses the Earth, the pulsar cannot be detected by radio telescopes. Fermi’s ability to detect so many radio-quiet gamma-ray pulsars indicates that the gamma-rays are emitted in a beam that is wider and more fan-like than the radio beam. “This favors models in which the gamma rays are emitted from the outer magnetosphere of the pulsar, as opposed to the polar cap much closer to the surface of the star,” Saz Parkinson revealed.

The very intense magnetic and electric fields of a pulsar accelerate charged particles to nearly the speed of light, and these particles are ultimately responsible for the gamma-ray emissions. Because the rotation of the star powers the emissions, isolated pulsars slow down as they age and lose energy. But a binary companion star can feed material to a pulsar and spin it up to a rotation rate of 100 to 1,000 times a second. These are called millisecond pulsars, and Fermi scientists detected gamma-ray pulsations from eight millisecond pulsars that were previously discovered at radio wavelengths. Those results are reported in a second study also published in the July 2 edition of Science.