You are here: Home › News › Darwinian Principles Used To Breed Winning Race Cars
By Will Parker on June 18, 2004 in News 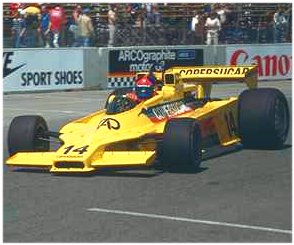 University College London scientists have developed a technique that ‘breeds’ winning Formula One cars. By applying Darwinian principles to the sport of motor racing, the researchers demonstrate that it’s possible to knock crucial tenths-of-a-second off lap time by tailoring a car’s setup to whatever conditions are faced on the track.

In a paper to be released later this month, researchers will report on a new computer model based on genetic algorithms that optimises performance by selectively combining the best settings of Formula One cars to produce the ultimate configuration.

Results show it’s possible to shave 0.88 of a second per lap from the best time. In an industry where 1/100th of a second can separate a winner from a loser, that can make all the difference.

Dr. Peter Bentley, senior author of the study, said: “Formula One spends millions each year designing and applying the latest technology to ensure their cars can handle whatever is thrown at them on the track. Each car can be modified in hundreds of way to optimise performance. Even minor changes in wing height, suspension stiffness or type of tyre rubber are ‘tweaked’ to give them the competitive edge.

Before every race, attempts are made to optimise settings for given conditions but cars are so finely calibrated than even subtle changes in temperature can affect performance. Decisions are based on experience but there are no guarantees they will always get it right. By running simulations we were able to distinguish how different facets of the car perform. Each best performance solution was treated as though it had its own genes that define those parameters. These winning solutions were then bred to produce the next generation, which combined the best settings of both parent cars until eventually we evolved the ultimate Formula One vehicle setup.”

Genetic algorithms are an emerging technology that unites the fields of biology and computer science by mimicking the process of evolution in computers in an effort to find the best solutions to complex problems. A number of possible solutions to the problem are treated as ‘organisms’ known as phenotypes. These are placed into a simulated environment, allowing them to be judged by a set of conditions. Only the better phenotypes survive and they produce ‘children’ in the next generation. These children are then judged in the environment, the better ones have children, and so on. After a number of generations have passed, fitter phenotypes evolve with new forms better suited to the task required.

The researchers configured 68 parameters in the simulation car, which affected suspension, the engine, tyre and brake pressure, fuel consumption and steering control. Five experiments were performed using a racing simulation designed by Electronic Arts. The first four experiments tested the car on the UK’s Silverstone track. Population size and the number of generations were varied to determine the effect on optimisation. The final run was tested on Germany’s Nurburgring track to assess whether the evolved car could still be a winner on a track that presented different challenges.

Mr. Krzysztof Wloch, lead author of the study, explains: “Silverstone is generally a fast circuit with several slow corners and a selection of fast sweeping turns. This allowed us to test cars that are tuned for higher speed, with less down force for cornering. In contrast Nurburgring is a very twisty and tough track. That means cars need to be configured for high-down force to handle tight corners at speed.”

At Silverstone, lap time was improved from 1 minute 27.005 seconds to 1 minute 21.050 seconds. Similarly, optimal lap time at Nurburgring improved by seven per cent.

To verify results, a virtual race was set up at Silverstone using cars configured using: genetic algorithms; the default settings of the simulator; human tuning; and an Internet expert. Results placed the evolved setting first with a time of 1 minute 20.349 seconds. The expert setting came second, 0.879 seconds slower. The human tuning came third with a time 1.09 seconds slower. The default settings came last, a massive 2.42 seconds behind. In real life, the fastest lap for Silverstone in 2003 was 1 minute 21.209 seconds.

“The real test would be to use our system in an actual Formula One car,” says Dr Bentley. “At present have they have their own software that monitors performance during a race. Using our system you could evolve the car setup while the racing is going on. So if a car was damaged, at the next pit stop you could optimise the settings to offset whatever has gone wrong. You could even beam changes to the car while it is on the track, but somehow I don’t think racing authorities would go for that.”

Abraham Isaac Kook: The Lights of Penitence, The Moral Principles, Lights of Hol

PRINCIPLES OF MERCURY ARC RECTIFIERS AND THEIR CIRCUITS PDF