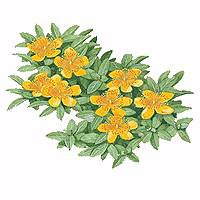 Plant pathologists from Cornell University and the U.S. Department of Agriculture (USDA) have found that hypericin (pronounced hi-PARIS-in), an active ingredient in St. John’s wort (Hypericum perforatum) — a popular herbal remedy for depression– might be increased when the plant is attacked by predators such as insects.

“It appears to increase its own chemical arsenal to ward off attack from predators,” says Donna M. Gibson, a USDA plant physiologist and Cornell adjunct professor of plant pathology. Gibson and Tara M. Sirvent, a Cornell plant pathology graduate student from Casper, Wyo., have developed a way to analyze the active chemical and other related compounds in the plant.

Sirvent and Gibson will present a poster, “Are hypericins involved in plant defense strategies of St. John’s wort?” on Aug. 15 at the annual meeting of the American Phytopathological Society at the Hyatt Regency Hotel in New Orleans. The research was funded by the USDA’s Agricultural Research Service and the agency’s Foreign Agricultural Service.

The researchers dissolved the chemical components of the plant in a solution and separated them using a technique called high-performance liquid chromatography. This enabled the detection of individual compounds in the plant. Sirvent and Gibson examined wild populations and found plants that had been exposed to stress — particularly attacks from insects — had increased amounts of hypericin.

In the marketplace, however, not all St. John’s wort products are the same. Previous studies have shown that the amount of hypericin in the plant — although usually labeled — can vary from plant to plant, manufacturer to manufacturer, bottle to bottle and pill to pill. Thus Sirvent and Gibson are trying to determine how much of a role pre-harvest factors play in chemical differences. They are examining factors such as light, moisture, altitude and latitude; the plant parts; the plant’s development stage; and the harvesting and handling practices that might affect the quality of the final product.

The plant typically is gathered as a weedy species in the western United States, but some is being grown commercially in the Pacific Northwest. It also is found along roadways and in fields in the eastern United States. Hypericin is concentrated in little black nodules — nearly imperceptible to the untrained eye — that adorn the floral edges and the plant’s leaves. Curiously, St. John’s wort is considered a noxious weed that can cause hypericism, or blistering and dyeing of an animal’s skin when it is eaten. Its scraggly, almost frail-looking stem produces a brilliant yellow flower cluster and it grows readily in rock quarries and in marginal areas such as roadsides, where little else grows.