You are here: Home › News › Cloned Pig Sets Stage For Organ Transplants
By Will Parker on August 19, 2000 in News 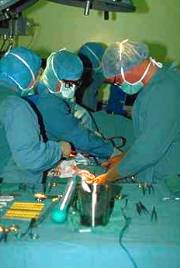 Her name is Xena, and she joins that other famous female, Dolly, in the ranks of the barnyard cloned. Xena’s debut is reported in the 18 August issue of the international journal, Science.

Xena’s name underscores one hope for the future of pig cloning-the use of these animals in xenotransplantation, where pigs would be donors of genetically modified organs for transplant into humans. Along with xenotransplantation, pig cloning also may pave the way for a variety of advances in animal husbandry, according to Science lead author Akira Onishi of the National Institute of Animal Industry in Japan.

The female piglet was cloned by microinjecting genetic material from fetal pig skin cells into eggs stripped of their own genetic material. A needle-like pipette used in the microinjection works like a tiny gun or drill, firing into the egg in a controlled and rapid motion.

This method is based on one reported two years ago by Teruhiko Wakayama and colleagues at the University of Honolulu to successfully clone mice.

“With microinjection, you can be quite selective about the genetic transfer,” says co-author Anthony C.F. Perry of the Rockefeller University. “You can separate the chromosomes out, and avoid contaminating the egg with the rest of the material from the donor cell nucleus.”

After stimulating the injected eggs with an electrical pulse and allowing them to mature into early-stage embryos, the Science researchers transplanted the embryos into four surrogate mothers. Healthy and apparently normal, Xena was the one birth from 110 transplanted embryos.

The piglet’s true colors were apparent from the beginning. Xena, cloned from cells from a strain of black pigs, has a black coat that contrasts sharply with the white coat of her surrogate mother. To confirm that Xena was a clone, however, the researchers compared the genetic “fingerprints” of Xena, the surrogate, and the donor cell line. Xena shares the genome of the donor cell line, and not the genome of her surrogate mother.

The next step in pig cloning-one that researchers hope will make xenotransplantation a viable option-will be to genetically modify the cells from which the pigs are cloned, according to Onishi.

Normally, the human immune system launches an all-out assault on pig organs after transplantation. To trick the body into accepting these transplants, scientists would like to alter the immunological makeup of these pig organs.

By making these alterations at the genetic level in the cells used to create clones, “it may some day be possible to obtain a supply of pigs with organs suitable for human transplant,” says Onishi.

Cloning also could be a boon to animal husbandry, notes Onishi, since it could help preserve the genetic pig types that have been carefully bred for meat production and increase the breeding stock of these animals.

The scientists plan to continue their cloning research using the microinjection technique and hope to improve their success rate in the future.