When I was watching Finding Dory last weekend, one character caught my eye: Hank the octopus (or septopus—you will understand this reference when you see the movie). Throughout the movie, Hank uses his ability to blend into his surroundings, a skill that is very useful for Dory’s plan to reunite with her parents.

Many cephalopods—which include octopus, squid, and cuttlefish—can camouflage in the blink of an eye. This ability helps them hunt for food, avoid being hunted by their predators, warn their predators, and communicate with other cephalopods. Here’s a video showing an octopus’s camouflaging skills in the wild:

Camouflaging cephalopods have thousands of pigmented cells called chromatophores beneath their skin. Chromatophores have balloon-like elastic sacs that are full of pigments, which are black, brown, orange, red, or yellow. The cells are connected to the animals’ muscles, which contract or expand the pigment sacs and allow the animals to create complex patterns and different color intensities on their bodies. 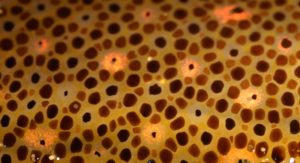 Chromatophores are classified into several categories by the pigments’ colors or effects. Xanthophores have yellow pigments, erythrophores red, melanophores black, and cyanophores blue. Iridophores and leucophores create iridescent colors or reflect colors of the environments, respectively.

In addition to chromatophores, some cephalopods can control the size of their skin projections—called papillae—to recreate the texture of their surroundings. This 3D replica is made possible by the octopus’s muscular hydrostat, which is a biological structure mainly made of muscles with little or no skeletal support. Muscular hydrostats can easily change shape to bend, extend, etc. Some other examples of muscular hydrostats are our tongue and an elephant’s trunk. Check out a close-up video of the octopus’s papillae:

Unsurprisingly, researchers are taking notes from the cephalopods to develop better camouflaging technology.

Alon Gorodetsky, assistant professor of chemistry at the University of California, Irvine, studies proteins found in cephalopod skin for stealth applications. Last year, Gorodetsky and his colleagues drew an inspiration from the cephalopods’ stealthy ability and developed stickers that can disguise objects from infrared thermal imaging—representing a big step toward military camouflage technology.

“Our work constitutes a rare example of the translation of cephalopod adaptive coloration principles specifically to infrared, rather than visible, camouflage,” The authors wrote. “The dearth of previous literature precedent in this area is quite unexpected given the widely acknowledged importance of infrared signaling and detection for industrial and military applications.”

Related:
Discuss this article in our forum
Bacteria modified with squid protein could be a camouflage game-changer for military
Camouflage or bright colors? What’s better to live long and prosper?