You are here: Home › Animal Kingdom › News › Dung beetles’ galactic navigation
By Will Parker on January 24, 2013 in Animal Kingdom, News 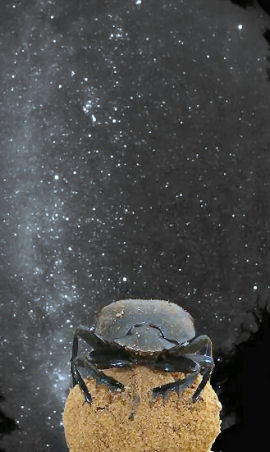 A beetle with a tiny brain appears to use the Milky Way galaxy for navigation, a feat that has never before been seen in an insect before, say scientists from South Africa and Sweden who made the discovery. Their report, appearing inCurrent Biology, shows that even on the darkest of nights, the African ball-rolling insects are guided by the soft glow of the Milky Way.

“Even on clear, moonless nights, many dung beetles still manage to orientate along straight paths,” said researcher Marie Dacke, of Lund University in Sweden. “This led us to suspect that the beetles exploit the starry sky for orientation.”

Dacke and her colleagues found that dung beetles do transport their dung balls along straight paths under a starlit sky but lose the ability under overcast conditions. Wanting to explore the possibility that the beetles were navigating by the stars, the researchers conducted further experiments in a planetarium. Dacke reports that the beetles stayed on track equally well under a full starlit sky and one showing only the diffuse streak of the Milky Way.

That makes sense, according to Dacke, because the night sky is sprinkled with stars, but the vast majority of those stars should be too dim for the beetles’ tiny compound eyes to see.

So, although their eyes are too weak to distinguish individual constellations, dung beetles use the gradient of light to dark provided by the Milky Way to ensure they keep rolling their balls in a straight line and don’t circle back to competitors at the dung pile (who might steal their dung ball).

While birds and humans navigate by the stars, the new work is the first convincing evidence for such abilities in insects. It is also the first known example of any animal navigating by the Milky Way as opposed to individual stars.

“Dung beetles are known to use celestial compass cues such as the sun, the moon, and the pattern of polarized light formed around these light sources to roll their balls of dung along straight paths,” Dacke said. “Celestial compass cues dominate straight-line orientation in dung beetles so strongly that, to our knowledge, this is the only animal with a visual compass system that ignores the extra orientation precision that landmarks can offer.”

Multitasking: you’re bad at it
Synesthesia traced to childhood toy