You are here: Home › Mind and Brain › News › Synesthesia traced to childhood toy
By Will Parker on January 27, 2013 in Mind and Brain, News 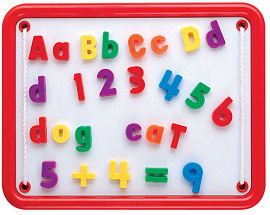 Experiencing a color when viewing particular letters or numbers – known as color-graphemesynesthesia – may partly be a learned behavior, say Stanford researchers who uncovered startlingly similar color-letter pairings shared by a number of color grapheme synesthetes who played with the same childhood toy.

Witthoft said that matching data from the 11 participants showed reliably consistent letter-color matches, both within and between testing sessions (even after a delay of up to 7 years). The participants also performed a timed task, in which they were presented with colored letters for 1 second each and required to indicate whether the color was consistent with their synesthetic association. Their data show that they were able to perform the task rapidly and accurately.

Witthoft and Winawer say that these data suggest that the participants’ color-letter associations are specific, automatic, and relatively constant over time, thereby meeting the criteria for true synesthesia.

The paper claims that these are the first and only data to show learned synesthesia of this kind in more than a single individual. Witthoft stresses this does not mean that exposure to the colored letter magnets was sufficient to induce synesthesia in the participants, though it may have increased the chances.

Based on their findings, Witthoft and Winawer conclude that a complete explanation of synesthesia must incorporate a central role for learning and memory.

Related:
Discuss this article in our forum
Scientists mull advantage of tasting words and hearing colors
“Seeing” auras is really synesthesia, say Euro scientists
A Penny for Your Qualia