You are here: Home › Evolution › News › Simulation reveals evolutionary origins of modularity
By Will Parker on January 29, 2013 in Evolution, News 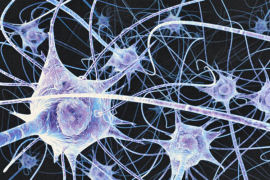 Robotics researchers say they now understand why humans, bacteria and other organisms evolved in a modular fashion, a finding that they believe will lead to a deeper understanding of the evolution of complexity.

The new insights, detailed in Proceedings of the Royal Society, were gained from a computer simulation that evolved over 25,000 generations.

The brain and gene regulatory networks are two examples of how modularity emerges from evolutionary forces. Like engineers, nature builds things modularly by building and combining distinct parts, but that does not explain how such modularity evolved in the first place. Richard Dawkins and the late Stephen Jay Gould both identified the question of modularity as central to the debate over the evolution of complexity.

For many years, the prevailing assumption was simply that modules evolved because entities that were modular could respond to change more quickly, and therefore had an adaptive advantage over their non-modular competitors. But that theory may be supplanted by the new work from researchers at Cornell University and Université Pierre et Marie Curie in Paris.

They contend that evolution produces modules not because they produce more adaptable designs, but because modular designs have fewer and shorter network connections, which are costly to build and maintain.

Researchers Hod Lipson, Jeff Clune and Jean-Baptiste Mouret tested their cost-of-connection theory by simulating the evolution of networks with and without a “cost” for network connections. “Once you add a cost for network connections, modules immediately appear. Without a cost, modules never form. The effect is quite dramatic,” said Clune.

The new insight could aid in the development of artificial intelligence, say the researchers, who believe that being able to evolve modularity will allow the creation of complex, sophisticated computational brains that could mimic the grace and cunning of animals.