You are here: Home › Evolution › News › Natural selection reducing road kill
By Will Parker on March 18, 2013 in Evolution, News 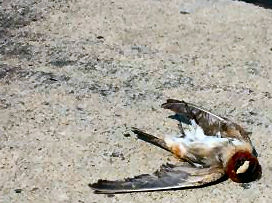 The Browns’ road kill surveys reveal a sharp decline in mortality over the last 30 years, a drop that can’t be explained by declines in the bird population or in traffic volume. The birds that continue to die on the roads are those with longer-than-average wingspans.

Brown believes the shorter wingspans of the surviving birds may help them take off more quickly and pivot away from passing cars. “Longer-winged swallows sitting on a road probably can’t take off as quickly, or gain altitude as quickly, as shorter-winged birds, and thus the former are more likely to collide with an oncoming vehicle,” he explains.

It’s possible that other factors may be at play. For instance, swallows do learn from each other. But Brown says that regardless of the underlying causes, the findings show that traffic-related mortality can lessen over time even when traffic does not. “Evolution is an ongoing process, and all this – roads, SUVs, and all – is [now] part of nature; they exert selection pressures in a way we don’t usually think about,” he notes.

The researchers speculate that this may be good news for other species – including turtles and snakes – which are also known to suffer significant mortality on the nation’s roadways.