You are here: Home › Animal Kingdom › News › Read my skin: chameleon color communication deciphered
By Will Parker on December 12, 2013 in Animal Kingdom, News 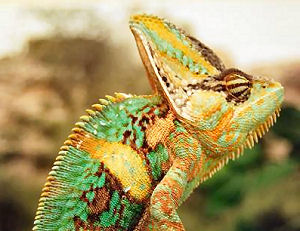 Chameleons can change color to blend in with the environment, but biologists from Arizona State University now say that chameleons’ body regions can also function as “billboards” for communicating different types of information during social interactions.

Chameleons typically have resting colors that range from brown to green, with hints of yellow, but each chameleon also has unique markings. During interactions with others, the lizards show bright yellows, oranges, greens and turquoises.

Researchers Russell Ligon and Kevin McGraw used photographic and mathematical modeling tools to study how the color change of veiled chameleons (Chameleon calyptratus, pictured) relates to aggressive behavior. They studied the distance, maximum brightness and speed of color change of 28 different patches across the chameleons’ bodies. Their findings appear in the journal Biology Letters.

Lignon found that when male chameleons challenge each other for territory or a female, their coloring becomes brighter and much more intense. Males that display brighter stripes when they are aggressive are more likely to approach their opponent, and those that achieve brighter head colors are more likely to win fights. Interestingly, how quickly their heads change color is an important predictor of which chameleon will win a skirmish.

“We found that the stripes, which are most apparent when chameleons display their bodies laterally to their opponents, predict the likelihood that a chameleon will follow up with an actual approach,” explained Ligon. “In addition, head coloration – specifically brightness and speed of color change – predicted which lizard was going to win.” 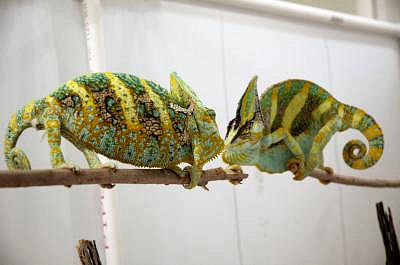 “By using bright color signals and drastically changing their physical appearance, the chameleons’ bodies become almost like a billboard – the winner of a fight is often decided before they actually make physical contact,” Ligon said. “The winner is the one that causes its opponent to retreat. While sometimes they do engage in physical combat, these contests are very short – five to 15 seconds. More often than not, their color displays end the contest before they even get started.”