You are here: Home › Animal Kingdom › News › Opossum-based antidote to snake venom could save thousands of lives
By Will Parker on March 22, 2015 in Animal Kingdom, News 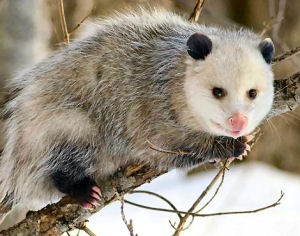 A peptide found in opossums that can be manufactured easily could provide a novel and inexpensive antidote for venomous snake and scorpion bites. The researchers behind the discovery believe it could save thousands of lives worldwide, without the side effects of current antivenom treatments.

Worldwide, an estimated 421,000 cases of poisonous snake bites and 20,000 deaths from these bites occur yearly, according to the International Society on Toxicology. Details of the work were presented at the 249th National Meeting & Exposition of the American Chemical Society.

Researcher Claire F. Komives, from San Jose State University, said that opossums shrug off snake bite venom with absolutely no ill effects. “Initial studies showing the opossum’s immunity to snake venom were done in the 1940s. In the early 1990s, a group of researchers identified a serum protein from the opossum that was able to neutralize snake venoms. Then, one researcher, B. V. Lipps, found that a smaller chain of amino acids from the opossum protein [a peptide] was also able to neutralize the venom,” she explained.

But Komives says it appears that no one had followed up on those studies to develop an antivenom therapy – at least not until she and her team came along. Armed with this information, they had the peptide chemically synthesized. When they tested it in venom-exposed mice, they found that it protected them from the poisonous effects of bites from U.S. Western Diamondback rattlesnakes and Russell’s Viper venom from Pakistan. The exact mechanism is not known, but computer models suggest that the peptide interacts with proteins in the snake venom that are toxic to humans.

“Our approach is different because most antivenoms are made by injecting the venom into a horse and then processing the serum,” says Komives. “The [traditional] serum has additional components, however, so the patient often has some kind of adverse reaction, such as a rash, itching, wheezing, rapid heart rate, fever or body aches. The peptide we are using does not have those negative effects on mice.”

Komives’ team showed that they could program the bacteria E. coli to make the peptide. Producing the peptide in bacteria should enable the group to inexpensively make large quantities of it. Because the process is inexpensive, the antivenom has a good chance of being distributed to underserved areas across the globe, according to Komives. That includes India, Southeast Asia, Africa and South America, where poisonous snakes bite thousands of people every year.

Interestingly, Komives’ team says the antivenom would probably work against venoms from other snakes, as well as against scorpion, plant, and bacterial toxins. The team plans to test this theory soon. They also plan to make large quantities of the antivenom and test it on mice, using a wide variety of venoms and toxins.