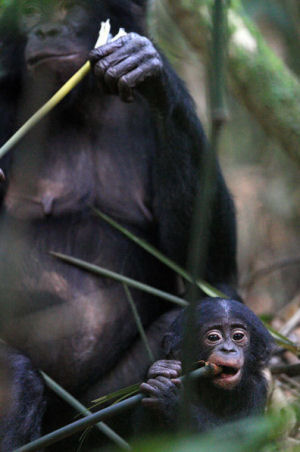 Bonobos and chimpanzees are closely related but bonobos lack of aggression, playfulness, and strong familial ties make them very different to their chimp cousins. Now, researchers say that these behavioral differences might be because bonobos retain elevated thyroid hormone concentrations well into adulthood, whereas in humans and chimps, levels decline after puberty.

The researchers, from the Max Planck Institute, think that this late decline of thyroid hormones might also indicate a delayed development of their mental capacities. “The thyroid hormones are responsible for brain and somatic growth as well as for maturation,” explained Verena Behringer, of the Max Planck Institute for Evolutionary Anthropology. “Later, they influence somatic growth and the emergence of specific developmental stages such as puberty and adulthood.”

For the study, Behringer and her co-researchers investigated levels of thyroid hormones in urine samples from around 200 zoo-living animals ranging from 1 to 56 years of age.

Analysis showed that the thyroid hormone pattern of modern humans and chimpanzees was very similar, with high levels before puberty and a decrease of this hormone during and after puberty. Unexpectedly, samples of bonobos differed: the concentration of the thyroid hormone Triiodthyronin remained high well into adulthood.

“Compared to chimpanzees, bonobos retain the elevated levels of thyroid hormone which are a characteristic trait for young individuals for a longer time and experience the decline of thyroid hormones relatively late in life,” noted Behringer.

The new findings may also shed light on why cognitive development is delayed in bonobos when compared to chimpanzees. “The late decline of thyroid hormones in bonobos might show that these animals’ mental capacities start developing later in life,” speculates Behringer.

“We want to find out next what the biological relevance of the high thyroid levels in bonobos is in detail,” she added. “As the thyroid hormone decline in humans is between the bonobos and chimpanzees, it remains to be seen which of the two species represents the original thyroid rhythm, that is, whether the chimpanzee is early ripe, or the bonobo a late bloomer.”

Related:
Discuss this article in our forum
Bonobos show their dark side
Bonobos Put One Over Chimps
Was The Missing Link A Tripping Chimp?
Chimp Culture Human-Like