Was The Missing Link A Tripping Chimp?

Drugs have played a significant role in everyday life stretching a long way back into human history. They're often associated with various rites of passage, from religious ceremonies to coming of age initiations, to youth rebelling against the status quo (while perhaps listening to Status Quo). Signs of our love for noxious but pleasant substances are evident from when we have our first cup o' Joe in the morning to "last drinks" in the evening.

Some commentators believe that the taking of drugs allows one to have a greater perspective on life, to be able to see the bigger picture. And in the words of indestructible rock legend and drug connoisseur Ozzy Osbourne: "I don't even know who Ozzy is. I wake up a new person every day." A common theme among recreational drug users is that the gap between subjective and objective realities diminishes, giving rise to what is sometimes termed a heightened sense of self-awareness. This has been cited frequently in regard to some of the psychoactive and psychedelic ingredients found in some tree and shrub roots in the heart of Africa, where coincidently, millions of years ago, hominids took the first step away from the forest onto the savannahs of Africa.

The reasons why our human ancestors split from our chimp/bonobo forest dwelling chums are sketchy, but perhaps their eating patterns may provide some indication. About five to seven million years ago (the transition between the Miocene and Pliocene epochs) when the lineage of humans and chimpanzees split from their common ancestor, edible root plants similar to rutabagas and turnips may have been one of the reasons. According to research published in the Journal of Human Evolution, by anthropologists Greg Laden of the University of Minnesota and Richard Wrangham of Harvard University, the presence of fleshy underground storage organs like roots and tubers must have sustained our ancestors who left the rain forest to colonize the savannah. "You can think of roots as a kind of 'conveyor belt'... they were somewhat available in the forest, but abundant on the savannah," said Laden. "Once roots were 'discovered,' chimp-like creatures would not only be able to survive on the savannah, but may well have been compelled to extend their range into more and more open habitats."

So, roots may have been what sustained our ancestor's outward explorations, but what made these ambitious chimps make the move in the first place? When our ape ancestors moved - for reasons unknown - onto the open, relatively treeless savannah, they left behind the rain forest and its abundance of fruit and leaves, the mainstays of modern chimpanzee diets. It seems odd that any animal other than one that was self-aware and self-conscious would make such a move without an obvious and natural advantage. We know that chimps stayed behind in the forests and survived quite happily until the present day without having to make the initial move that our ancestors did. So what was the catalyst for the move?

Interestingly, some of the roots of particular shrubs in Africa contain psychoactive alkaloids (an alkaloid is a nitrogenous organic molecule that has a pharmacological effect on humans and animals) that religious cults and psychiatrists use. Only our human ancestors would have been able to eat these roots, as the jaws of their chimp companions were not strong enough. Laden and Wrangham say that the evidence lies in the fossil record, specifically teeth and jaws. The teeth and jaws of savannah dwelling apes evolved into large massive jaws, jaw muscles and molars, ideal for grinding roots instead of shearing leaves. The size of the teeth and jaws reflect the apes' secondary food source (roots) instead of primary foods like meats and fruits, which do not require such massive chewing abilities. So, is it possible that human intelligence evolved as a result of some psychoactive ingredient contained in an African root seven million years ago?

Let's examine the plausibility of such a hypothesis. One of the main culprits that could be considered is the root of the Tabernanthe iboga shrub, found in the equatorial regions of Africa. Despite climate changes that led to a drier African climate and the decline of tropical forests during the Pliocene epoch, it is well documented that there was a thin band of equatorial tropical forests and savannahs in existence. This makes the existence of the Iboga shrub, or those related to the dogbane variety, perfectly plausible around the time of the split between chimp and hominid. The geographical location of these tropical regions and the areas where such trees and shrubs grow is also consistent with the location of early humans five to seven million years ago. 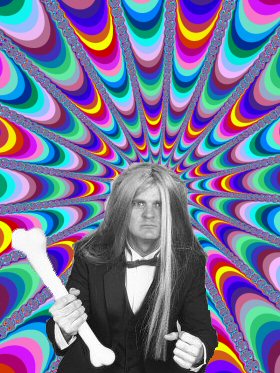 The hallucinogenic drug Ibogaine, derived from the shrub's roots, is the main psychoactive ingredient of the Tabernanthe iboga, and is still used in the Bwiti ancestor cult, the Mbieri curing cult, and other nativistic religious movements in tropical sub-Saharan West Africa. Ibogaine has also attracted the attention of Western medicine, and is used for a variety of treatments including, ironically, various drug addictions. Ibogaine's chemical structure is truly astounding as far as psychoactive ingredients are concerned. The composition of Ibogaine has been described by Alexander Shulgin (the rogue chemist who popularized ecstasy) and Ann Shulgin, in their book Tihkal, as: "some pretty far-out chemistry." Shulgin says that the chemistry of Ibogaine is "awesome", and is a rich source of tryptamines that produce the psychedelic experience in humans.

"Most of these are kosher tryptamines in that they carry the tryptamine structural skeleton. And, in turn, a great number of the tryptamine alkaloids are found in the remarkable family Apocynaceae, which is the ultimate treasure-trove of alkaloids, probably the richest single source of pharmacologically active compounds in the entire plant kingdom," explains Shulgin.

In his book Hallucinogens and Culture, Peter Furst claims that: "even in our waking hours our minds are constantly flipping back and forth between discrete, or alternate (but nonetheless complementary), inward and outward directed states, and that this phenomenon bears directly on the use and effects of psychedelics." It is important to remember that our own brain is an organic chemical cocktail that controls behavior, motor mechanics and awareness. Drugs work by altering the chemical states of our brains and give us a new way of perceiving and, therefore, experiencing physical environments.

Is it possible that our early ancestors experienced this when eating the root of the Iboga shrub? Furst observes that psychoactive drugs have the potential to: "lock a non-ordinary or inward directed state of consciousness temporarily into place, presumably by blocking out certain areas or chemicals involved in 'ordinary' modes of awareness." An altered state of awareness may have been what happened to early hominids, which allowed them to experience certain "realizations" about their environment. Shifting geographical location in search of different food sources, tool making abilities, and later painting and language, may have been instigated by the ingestion of psychoactive roots. And let's face it, you'd have to be high on something to leave the safety of a food laden tropical paradise, a relative Eden, only to venture out among much larger, faster predators with big pointy teeth on the African savannahs.

Tool making is perhaps another attribute that could be ascribed to a mind-expanding experience. It is presumed today that chimps did have tool-making abilities, and by every indication this is true, but perhaps the chimps mimicked these skills after watching their fast-evolving, root eating hominid cousins. And we shouldn't underestimate the brainpower needed even to make a basic stone tool, as even the crudest form of tool-making required our ancestors to make a massive cognitive leap. Researchers at the Yerkes Primate Center in Atlanta, for example, showed that an intelligent chimp called Kanzi could not be shown how to make an effective stone tool successfully, despite evidence showing that the earliest Oldowan tool-makers understood this principle.

There are bound to be more discoveries that will further reveal the events surrounding the chimp/hominid split, and, therefore, we can only really speculate on the origins of human consciousness and intelligence. But our widespread use and affiliation with all things drug-like must have originated somewhere along the line, and why couldn't the origin also be the seat of human consciousness? Furst states that: "There are obviously wide implications, both biological, evolutionary and philosophical, in the discovery that precisely in the chemistry of our consciousness we are kin to the plant kingdom."

It's said that there is a grain of truth in all mythologies. Could the truth in human evolution be that the Iboga is the original tree of knowledge?