You are here: Home › Humans › News › IQ plummets for women in social settings
By Will Parker on January 23, 2012 in Humans, News 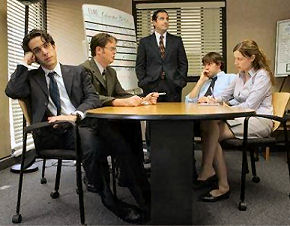 A new Virginia Tech study highlights the unexpected and dramatic consequences subtle social signals in group settings can have on individual cognitive functioning, especially for women. The researchers say settings such as juries, parties, business meetings and classrooms all have the potential to derail our cognitive skills. “You may joke about how committee meetings make you feel brain dead, but our findings suggest that they may make you act brain dead as well,” quipped lead researcher Read Montague.

Montague and his co-researchers used functional magnetic resonance imaging (fMRI) to investigate how the brain processes information about social status in small groups and how perceptions of that status affect expressions of cognitive capacity. “We started with individuals who were matched for their IQ,” he explained. “Yet when we placed them in small groups, ranked their performance on cognitive tasks against their peers, and broadcast those rankings to them, we saw dramatic drops in the ability of some study subjects to solve problems. The social feedback had a significant effect.”

In the study, subjects from two universities completed a standard test to establish baseline IQ. The results were not viewed until after a series of ranked group IQ tasks, during which test takers, in groups of five, received information about how their performances compared to those of the other group members.

Although the test subjects had similar baseline IQ scores (a mean of 126, compared to the national average of 100) they showed a range of test performance results after the ranked group IQ tasks, revealing that some individuals’ expressed IQ was affected by signals about their status within a small group.

To understand what was happening in the brain during the observed changes in IQ expression the subjects were divided into two groups based on the results of their final rank. The highest performers and the lowest performers then had their brains scanned using fMRI while they participated in the task.

The researchers observed that all the subjects had an initial increase in amygdala activation and diminished activity in the prefrontal cortex, both of which corresponded with a lower problem-solving ability. By the end of the task, however, the high-performing group showed a decreased amygdala activation and an increased prefrontal cortex activation, both of which were associated with an increased ability to solve more difficult problems.

Additionally, positive changes in rank were associated with greater activity in the bilateral nucleus accumbens, which has traditionally been linked to learning and has been shown to respond to rewards and pleasure. Negative changes in rank corresponded with greater activity in the dorsal anterior cingulate cortex, consistent with a response to conflicting information.

Interestingly, neither age nor ethnicity showed a significant correlation with performance or brain responses but a significant pattern did emerge along gender lines. Although male and female participants had the same baseline IQ, significantly fewer women (23 percent) were in the high-performing group.

The findings, reported in the journal Philosophical Transactions of the Royal Society B, effectively negate the idea that there is a division between social and cognitive processing in the brain and show that the two areas deeply interact with each other. They also call into question the idea that IQ is something that can reliably be measured in isolation without considering how it is affected within social contexts.

“We don’t know how much these effects are present in real-world settings,” co-researcher Kenneth Kishida concluded. “What, exactly, is society selecting for in competitive learning and workplace environments? By placing an emphasis on competition, for example, are we missing a large segment of the talent pool? So much of our society is organized around small-group interactions… We need to remember that social dynamics affect not just educational and workplace environments, but also national and international policy-making bodies, such as the U.S. Congress and the United Nations.”