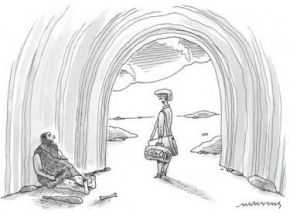 The stereotypical belief that men have a GSOH is based on an evolutionary sexual-selection argument that likens a man’s sense of humor to a peacock’s fancy tail or a deer’s rack of antlers, useful primarily for showing off and impressing potential mates. But Mickes says the findings don’t indicate that. “The differences we find between men’s and women’s ability to be funny are so small that they can’t account for the strength of the belief in the stereotype.”

For the study, Mickes and her team had males and females writing captions for New Yorker cartoons in a quiet room. Then, the cartoons were displayed with two captions to another group of participants. This group rated the captions in a five-round knockout tournament. The winning captions of round one were then randomly pitted against each other and so on. The number of rounds, from zero to five, that captions survived before being knocked out determined the writers’ average scores.

The results, published in the journal Psychonomic Bulletin & Review, showed that the men edged out the women by 0.11 points out of a theoretically possible perfect score of 5.0. Male prowess at the task of being funny on command, said study co-author Nicholas Christenfeld, was “just at the edge of detectability.”

What’s more interesting, says Mickes, and what runs contrary to the standard explanations of why men might be funnier, is that men did better with other men: Female raters allocated only an average 0.06 more points to the male writers, while the male raters gave them a significantly higher average of 0.16 more points. “Sad for the guys,” Christenfeld quipped, “who think that by being funny they will impress the ladies, but really just impress other men who want to impress the ladies.”

Why are men the marginally funnier sex? In analyzing the content of the captions, the researchers noted that men used profanity and sexual humor a little more frequently, but that didn’t seem to account for the win since that style of caption didn’t necessarily do better, with either sex. “It could be that men see more opportunities to take a stab at humor,” Christenfeld offered. “It could be that they try harder or more often.”