You are here: Home › Humans › News › Joke boffins analyze tragedy humor
By Will Parker on September 11, 2012 in Humans, News 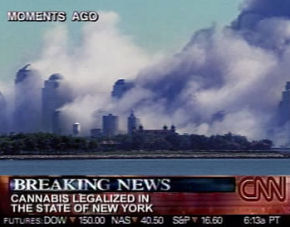 “Too soon!” complained the audience when comedian Jeffrey Ross did a skit about the recent shootings in Colorado, but psychologists exploring humor and tragedy say it’s not quite that simple. The new research, from the Humor Research Lab at the University of Colorado Boulder, asked the question: when are tragedies okay to joke about – and when are they not?

According to “Benign Violation Theory,” humor emerges when we perceive something that is wrong (a violation), while also seeing that it is okay (benign). Several studies have shown that psychological distance is one key ingredient that can make a violation seem okay and that being removed from a violation – by space, time, relationships, or imagination – enhances humor.

But that distance needs to be just right for humor to happen. “Having some distance from tragedy helps to create a benign violation, which facilitates comedy,” said psychologist Peter McGraw, who runs the Humor Research Lab. “But when you become too distant from a mild violation, it’s just not funny anymore.”

In a new article in Psychological Science, McGraw and colleagues explore how violation severity (how “bad” it is) and psychological distance (how removed we are) work together to facilitate humor.

In the first study, the researchers looked at the effect of psychological distance in terms of time. Participants were asked to describe an event from their lives that either became funnier or less funny as time passed. Participants then rated the event’s severity. In line with the researchers’ hypothesis, events that became funnier over time were rated more severe than the events that lost their comedic effect, which were seen as mild violations.

To examine social distance, the researchers conducted another study in which they asked undergraduates to read status updates from strangers and from friends on a social networking website. The college students reported that a stranger accidentally donating $1,880 over text message (severe violation) was funnier than a friend doing so, but the $50 donation (mild violation) was funnier when a friend made the mistake.

Another experiment examined distance by manipulating whether an image was seen as hypothetical or real. Undergraduates were told that images – a man with a finger coming out of his eye and a man with a frozen beard – were either digitally altered or not. The students rated the more disturbing image as more humorous when they were told it was fake and they reported the less disturbing image as more humorous when they thought it was real.

The final study looked at the effect of perceived physical distance on humor. Participants saw one of the images from the above study; instead of being told that they were either real or fake, the size and position of the images were manipulated so that they looked like they were either close to or far away from the viewer. In line with previous findings, the more disturbing image was rated as funnier when it looked far away, and the less disturbing image was rated as funnier when it appeared closer.

Together, says McGraw, the studies confirm that the space, time, social relationships, and hypotheticality that separate us from a violation interact with the severity of an event to influence how humorous a violation seems to us. “These findings suggest that there’s a real sweet spot in comedy – you have to get the right mix between how bad something is and how distant it is in order for it to be seen as a benign violation,” concluded McGraw.