You are here: Home › Mind and Brain › News › Autism’s facial characteristics revealed
By Will Parker on October 21, 2011 in Mind and Brain, News 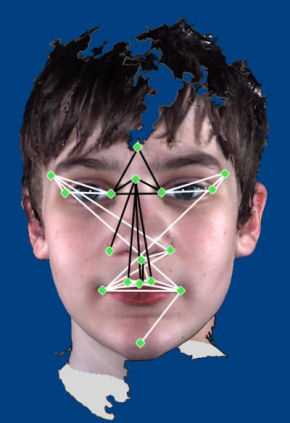 “There is no clear answer about whether autism is caused by genetics or byenvironmental influences,” said the study’s lead author, Kristina Aldridge. “If we can identify when these facial changes occur, we could pinpoint when autism may begin to develop in a child. Knowing that point in time could lead us to identify a genetic cause, a window of time when the embryo may be susceptible to an environmental factor, or both.”

The researchers used a camera system that captured a 3-D image of each child’s head and then mapped 17 points on the face. When Aldridge calculated the overall geometry of the face using these points she found statistically significant differences in face shape.

The study also identified two sub-groups of autistic children who show further distinct facial traits that occur with specific characteristics of autism, such as language problems and repetitive behaviors. “Identifying these sub-groups within the group of children with autism allows better study of these children and why autism is so variable,” said Aldridge.

Multitasking: you’re bad at it