You are here: Home › Humans › News › Awfulness of poverty ensured global spread of class system
By Will Parker on September 29, 2011 in Humans, News 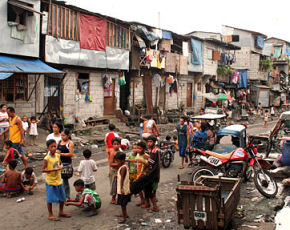 Evolutionary biologists at Stanford University have been pondering why most cultures have a class structure instead of being egalitarian. The answer they’ve arrived it is both ironic and shocking, as it appears that the very inequities of the class system were the driver for its global spread.

In the new Stanford study, appearing in the journal PLoS ONE, the researchers used a computer simulation to compare demographic stability and rates of migration for both egalitarian and unequal societies.

They found that class structure provided unequal access to resources, thereby contributing a destabilizing effect on the population, and driving migration and the creation of new stratified societies. “This is the first study to demonstrate a specific mechanism by which stratified societies may have taken over most of the world,” said Stanford’s Marcus Feldman. Previous hypotheses for the development of socioeconomic inequality have included the need for hierarchical control over crop irrigation systems and the compounding of small differences in individual wealth over time through inheritance.

Feldman explained that when resources were consistently scarce, egalitarian societies – which shared the deprivation equally throughout the population – remained more stable than stratified societies. In stratified societies, the destabilizing effect of unequal sharing of scarce resources gave those societies more incentive to migrate in search of added resources.

In environments where the availability of resources fluctuated from year to year, stratified societies were better able to survive the temporary shortages because the bulk of the deprivation was absorbed by the lower classes, leaving the ruling class – and the overall social structure – intact. That stability enabled them to expand more readily than egalitarian societies, which weren’t able to adapt to changing conditions as quickly.

“The fact that unequal societies today vastly outnumber egalitarian societies may not be due to the replacement of the ethic of equality by a more selfish ethic, as originally thought by many researchers,” said co-researcher Deborah Rogers. “Instead, it appears that the stratified societies simply spread and took over, crowding out the egalitarian populations.”