You are here: Home › News › Physics › Physicists map quantum to classical collapse
By Will Parker on July 31, 2014 in News, Physics 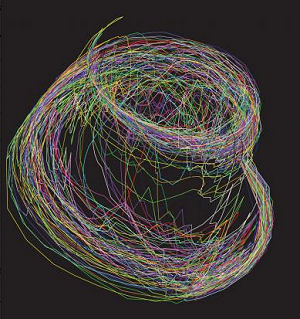 Extracting information from a system as it collapses from a quantum state to a classical state was never considered possible by the original founders of quantum theory, but Berkeley physicists have managed to extract information from a system continuously throughout its change of state, an achievement they say is like monitoring Schrodinger’s cat through the whole life or death process.

“Gently recording the cat’s paw prints both makes it die, or come to life, as the case may be, and allows us to reconstruct its life history,” said Irfan Siddiqi, UC Berkeley associate professor of physics, who is senior author of an article describing the work in the journal Nature. The Schrodinger’s cat paradox is a critical issue in quantum computers, where the input is an entanglement of states – like the cat’s entangled life and death – yet the answer to whether the animal is dead or alive has to be definite.

“To Bohr and others, the process was instantaneous – when you opened the box, the entangled system collapsed into a definite, classical state. This postulate stirred debate in quantum mechanics,” Siddiqi explained. “But real-time tracking of a quantum system shows that it’s a continuous process, and that we can constantly extract information from the system as it goes from quantum to classical. This level of detail was never considered accessible by the original founders of quantum theory.”

The achievement means that continuous error correction is possible in quantum computers. In the real world, everything from light and heat to vibration, can knock a quantum system out of its quantum state into a real-world, so-called classical state – like opening the box to look at the cat and forcing it to be either dead or alive. A big question regarding quantum computers, Siddiqi said, is whether you can extract information without destroying the quantum system entirely. “This gets around that fundamental problem in a very natural way,” he said. “We can continuously probe a system very gently to get a little bit of information and continuously correct it, nudging it back into line, toward the ultimate goal.”

Being two opposing things at the same time

In the world of quantum physics, a system can be in two superposed states at the same time, as long as no one is observing. An observation perturbs the system and forces it into one or the other. Physicists say that the original entangled wave functions collapsed into a classical state.

In the past 10 years, theorists such as Andrew N. Jordan, professor of physics at the University of Rochester and coauthor of the Nature paper, have developed theories predicting the most likely way in which a quantum system will collapse.

“The Rochester team developed new mathematics to predict the most likely path with high accuracy, in the same way one would use Newton’s equations to predict the least cumbersome path of a ball rolling down a mountain,” Siddiqi said. “The implications are significant, as now we can design control sequences to steer a system along a certain trajectory. For example, in chemistry one could use this to prefer certain products of a reaction over others.”

Siddiqi’s team proved Jordan correct. They measured the trajectory of the wave function of a quantum circuit – a qubit, analogous to the bit in a normal computer – as it changed. The circuit, a superconducting pendulum, could be in two different energy states and was coupled to a second circuit to read out the final voltage, corresponding to the pendulum’s frequency.

“If you did this experiment many, many times, measuring the road the system took each time and the states it went through, we could determine what the most likely path is,” Siddiqi said. “Then we could design a control sequence to take the road we want to take for a given quantum evolution. The experiment demonstrates that, for any choice of final quantum state, the most likely or ‘optimal path’ connecting them in a given time can be found and predicted. This verifies the theory and opens the way for active quantum control techniques.”

Related:
Discuss this article in our forum
The cloning of quantum information from the past may be Achilles’ heel of quantum cryptography
Algae turn quantum coherence on and off
Quasars at opposite ends of the Universe could close a loophole in quantum mechanics
Entangled quarks hint at reconciliation of quantum mechanics and general relativity