You are here: Home › Medicine › News › Nose loses monopoly on sense of smell
By Will Parker on April 7, 2013 in Medicine, News 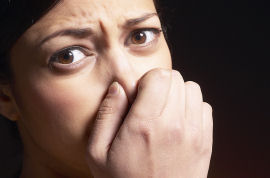 In a discovery suggesting that odors may have a far more important role in life than previously supposed, scientists have found that heart, blood, lung, and other areas of the body have the same olfactory receptors for sensing odors that exist in the nose.

Lead researcher Peter Schieberle, of the Technical University of Munich, presented his team’s findings today at the 245th National Meeting & Exposition of the American Chemical Society.

Previously, scientists had believed that the nose had a monopoly on olfactory receptors. Located on in the mucus-covered olfactory epithelium in the back of the nose, olfactory receptors are docking ports for the airborne chemical compounds responsible for the smell of food and other substances. When an airborne molecule connects with a receptor, a chain of biochemical events is triggered that register in the brain as specific odors.

Schieberle said the discovery of olfactory receptors on other, non-olfactory cells came as a complete surprise. “In the nose, these so-called receptors sense substances called odorants and translate them into an aroma that we interpret as pleasing or not pleasing in the brain,” he explained. “Once a food is eaten, its components move from the stomach into the bloodstream. But does this mean that, for instance, the heart ‘smells’ the steak you just ate? We don’t know the answer to that question.”

Schieberle’s work at the Technical University of Munich focuses on a field termed “sensomics,” which examines exactly how the mouth and the nose sense key aroma, taste and texture compounds in foods.

The researchers use sensomics to better understand why foods taste, feel and smell appetizing or unappetizing. In another research project, they discovered that although coffee contains 1,000 potential odor components, only 25 actually interact with an odor receptor in the nose and are smelled.

Perhaps the most intriguing of the new findings are that primary blood cells isolated from human blood samples are attracted to certain odorant molecules. Schieberle described one experiment in which the researchers put an attractant odorant compound on one side of a partitioned multi-well chamber, and blood cells on the other side. The blood cells moved toward the odor.

“Once odor components are inside the body, however, it is unclear whether they are functioning in the same way as they do in the nose,” he noted. “But we would like to find out.”

Smell Proof Container With Grinder and Horned One Hitter, US SELLER