You are here: Home › Climate Change › News › Greening of Arctic will be dramatic, say scientists
By Will Parker on March 31, 2013 in Climate Change, News

New computer models based on observations of plant growth in the Arctic suggest that rising temperatures will lead to a massive increase in plant and tree cover over the next few decades. The research, appearing in Nature Climate Change, suggests that wooded areas in the Arctic could increase by as much as 50 percent.

“Such widespread redistribution of Arctic vegetation would have impacts that reverberate through the global ecosystem,” said Richard Pearson, lead author on the paper and a research scientist at the American Museum of Natural History.

Key to the rapid greening, explains Pearson, is the fact that Arctic temperatures are rising at about twice the global rate. The research team – which included scientists from the Museum, AT&T Labs-Research, Woods Hole Research Center, Cornell University, and the University of York – extrapolated climate scenarios to the 2050s to predict the types of plants that might flourish. According to Pearson, this type of modeling is a robust way to study the Arctic because the harsh climate limits the range of plants that can grow, making this system simpler to model compared to other regions, such as the tropics. 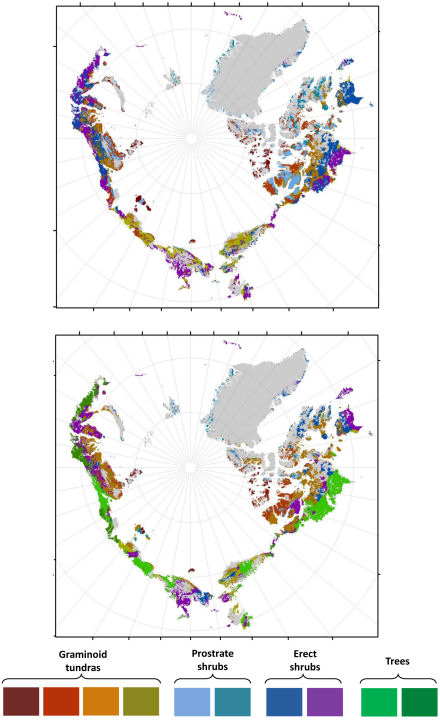 The new models reveal the potential for massive redistribution of vegetation across the Arctic, with about half of all vegetation switching to a different class and a massive increase in tree cover. According to Pearson, trees could grow hundreds of miles north of the present tree line.

The dramatic greening, Pearson adds, would likely force the shift of whole ecosystems. “These impacts would extend far beyond the Arctic region,” he said. “For example, some species of birds seasonally migrate from lower latitudes and rely on finding particular polar habitats, such as open space for ground-nesting.”

In addition, the researchers investigated the multiple climate change feedbacks that greening would produce. They found that a phenomenon called the albedo effect, based on the reflectivity of the Earth’s surface, would have the greatest impact on the Arctic’s climate. When the sun hits snow, most of the radiation is reflected back to space. But when it hits an area that’s dark, or covered in trees or shrubs, more sunlight is absorbed in the area and temperature increases. This has a positive feedback to climate warming: the more vegetation there is, the more warming will occur.

“By incorporating observed relationships between plants and albedo, we show that vegetation distribution shifts will result in an overall positive feedback to climate that is likely to cause greater warming than has previously been predicted,” concluded study co-author Scott Goetz, of the Woods Hole Research Center.