You are here: Home › News › Arctic Heatwave Sends Climatologists Back To Drawing Board
By Will Parker on September 27, 2007 in News 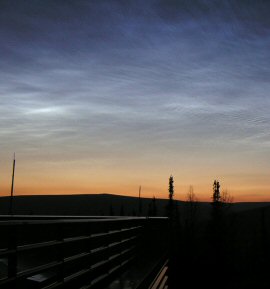 Unprecedented warm temperatures in the arctic this summer were so extreme that researchers have begun revising their climate forecasts. “Everything has changed dramatically in the watershed we observed,” reports Scott Lamoureux, leader of an International Polar Year project. “It’s something we’d envisioned for the future – but to see it happening now is quite remarkable.”

From their camp on Melville Island (Canada) last July, where they recorded air temperatures over 20C (in an area with July temperatures that average 5C), the team watched in amazement as water from melting permafrost a meter below ground lubricated the topsoil, causing it to slide down slopes, clearing everything in its path and thrusting up ridges at the valley bottom “that piled up like a rug,” says Dr. Lamoureux. “The landscape was being torn to pieces, literally before our eyes. A major river was dammed by a slide along a 200-metre length of the channel. River flow will be changed for years, if not decades to come.”

Comparing this summer’s observations against aerial photos dating back to the 1950s, the research leader calls the present conditions “unprecedented” in scope and activity. What’s most interesting, he says, is that their findings represent the impact of just one exceptional summer.

“A considerable amount of vegetation has been disturbed and we observed a sharp rise in erosion and a change in sediment load in the river,” Dr. Lamoureux noted. “With warmer conditions and greater thaw depth predicted, the cumulative effect of this happening year after year could create huge problems for both the aquatic and land populations. This kind of disturbance also has important consequences for existing and future infrastructure in the region, like roads, pipelines and air strips.”

If this were to occur in more inhabited parts of Canada, it would be “catastrophic” in terms of land use and resources, he continued. “It would be like taking an area the size of Kingston and having 15 per cent of it disappear into Lake Ontario.”