You are here: Home › Health › Mental Health › News › Parkinson’s treated with Victorian era device
By Will Parker on April 23, 2012 in Mental Health, News 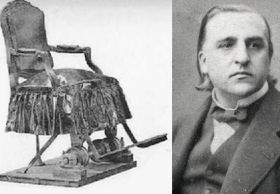 A 19th century “vibration chair” has been found by Rush University researchers to significantly improve some of the symptoms of Parkinson’s disease. The chair was designed by French anatomist Jean-Martin Charcot (pictured), who is often referred to as the father of modern day neurology. At the time, Charcot reported improvements in his patients, but he died before more complete evaluations could be completed. The Rush researchers set out to replicate his work to see if his claims hold true against modern scientific testing.

Charcot originally noted that his patients reported that during long carriage rides or train journeys, the uncomfortable or painful symptoms of Parkinson’s disease seemed to disappear, and the relief lasted quite some time after the journey. Acting on these anecdotes, he developed a chair that mimicked the continuous jerking of a carriage or train.

For the modern day assessment, lead researcher Christopher G. Goetz randomly assigned 23 patients to either a vibrating chair or the same chair without vibration. During the treatment sessions, both groups of study participants listened to a relaxation CD of nature sounds. The study participants underwent daily treatment for a month. “We attempted to mimic Charcot’s protocol with modern equipment in order to confirm or refute an historical observation,” explained Goetz.

“Our results confirm Charcot’s observation of improvement in Parkinson’s disease with chronic vibration treatment, but we did not find the effect specific to vibration,” said Goetz. “Instead, our data suggest that auditory sensory stimulation with relaxation in a lounge chair or simply the participation in a research protocol has equivalent benefit as vibration on motor function.”

Despite the indication that the effect is due to placebo or other nonspecific factors, Goetz says the findings are still of value. “Our results will allow clinicians to guide patients to at least one apparatus that is safe and associated with objective changes in parkinsonian impairment scores,” he concluded.

Related:
Discuss this article in our forum
More evidence for environmental chemicals contributing to Parkinson’s disease
Dopamine therapy turbocharges artistic drive
When Thinking Can Be Toxic