You are here: Home › Climate Change › News › Freight trains a clear winner over trucks in CO2 emission stakes
By Will Parker on December 12, 2011 in Climate Change, News 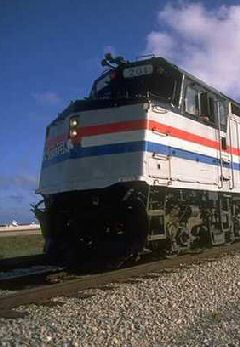 A University of Wisconsin-Madison analysis of the emissions generated from shipping freight via truck or by train shows that shipping by train delivers a big reduction in CO2 emissions.

Researcher Erica Bickford said much of the environmental benefit boils down to simple efficiency. For each ton of freight they carry, trucks go about 150 miles on a gallon of diesel whereas trains can move the same load more than 400 miles per gallon.

“There’s a 31 percent decrease in carbon dioxide produced by freight shipping in the region, and that’s straight from emissions,” says Bickford. “It’s 21 million metric tons of CO2, the equivalent of what’s produced by about 4 million cars.” The findings are based on a model of freight traffic in 10 Midwestern states from Kansas to Ohio. She presented her findings last week at the fall meeting of the American Geophysical Union in San Francisco.

While cutting CO2emissions by one-third is a desirable goal, Bickford acknowledges that, like trucks, diesel rail traffic also creates black carbon soot and the lung irritant nitrogen dioxide (NO2). More rail traffic would mean more pollutants near the tracks, but better air quality near roads frequented by trucks. This is ultimately a positive, she argues. “Black carbon and NO2 are harmful to everyone’s health. But because more people live near roads than railroad tracks, more people would benefit from the shifts in these pollutants.”

The effects of greater rail use would be particularly noticeable in the middle of the country, she contends. “We’re sort of a freight crossroads in the Midwest. International shipping comes into the country on the coasts and then passes through our backyard on the way to its destination.”

Bickford concludes by noting that there are a number of non-pollution benefits – reduced traffic congestion, wear on roads and demand for diesel fuel – that railed freight would also deliver. “Truck freight travels on publically-funded roads, rail traffic on privately-built tracks,” she says. “But these benefits could be an impetus for public investment in rail infrastructure.”