You are here: Home › Climate Change › News › Unclouding the behavior of clouds
By Will Parker on November 26, 2013 in Climate Change, News

How air pollution creates larger and longer lasting storm clouds has been a topic of intense debate in climatology circles. Now, a new investigation that finally reveals the atmospheric mechanism at work also shows how pollution plays into climate warming. 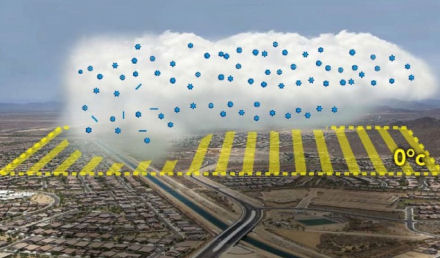 Previously, scientists had thought that pollution causes larger and longer-lasting storm clouds by making thunderheads draftier through convection. But the new research, appearing in the Proceedings of the National Academy of Sciences, shows that pollution makes clouds linger by decreasing the size, and increasing the lifespan, of cloud and ice particles.

Most climatologists would agree that the current models that predict weather and climate don’t reconstruct the lives of clouds well, especially storm clouds. Usually these models replace storm clouds with simple equations that fail to capture the whole picture. Because of these poor reconstructions, researchers have been faced with a dilemma: pollution causes the anvil-shaped clouds to linger longer than they would in clean skies – but why?

To solve this mystery, atmospheric scientist Jiwen Fan and her colleagues at the Department of Energy’s Pacific Northwest National Laboratory decided to compare real-life summer storm clouds to a computer model that zooms deep into simulated clouds. The model included physical properties of the cloud particles as well as the ability to see convection. Notably, Fan’s computer simulations took up to six months to run.

Fan and her team started with cloud data from three locations that differ in how polluted, humid, and windy they typically are: the tropics in the western Pacific, southeastern China, and the Great Plains in Oklahoma.

The team found that in all cases, pollution increased the size, thickness and duration of the anvil-shaped clouds. However, only two locations – the tropics and China – showed stronger convection. The opposite happened in Oklahoma – pollution made for weaker convection.

In addition, the team found that in clean skies, the heavier ice particles fall faster out of the anvil-shaped clouds, causing the clouds to dissipate. However, the ice crystals in polluted skies were smaller and too light to fall out of the clouds, leading to the larger, longer-lasting clouds.

Lastly, the team estimated how much warming or cooling the storm clouds contributed. Overall, they found the polluted clouds cooled the day and warmed the night, decreasing the daily temperature range.

Accounting for pollution effects on storm clouds using this new model could affect the ultimate amount of warming predicted for the Earth in the next few decades. “This study reconciles what we see in real life to what computer models show us,” concluded Fan. “Observations consistently show taller and bigger anvil-shaped clouds in storm systems with pollution, but the models don’t always show stronger convection. Now we know why.”

Related:
Discuss this article in our forum
Cloud-seeding microorganisms go under the microscope
Metallic vapor behind noctilucent reflectivity?
Predator-prey dynamics used to model cloud systems
Lots more habitable planets out there, thanks to clouds