You are here: Home › Health › Diet › News › Switch hands for a healthier diet
By Will Parker on September 5, 2011 in Diet, News 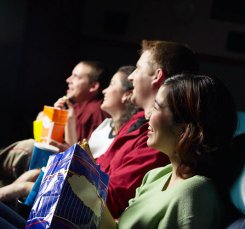 Psychologists from the University of Southern California found that popcorn munching moviegoers ate about the same amount of popcorn regardless of whether it was fresh or one-week old, showing that bad eating habits persist even when the food we’re eating tastes bad.

“For those in the habit of having popcorn at the movies, it made no difference whether the popcorn tasted good or not. When we’ve repeatedly eaten a particular food in a particular environment, our brain comes to associate the food with that environment and make us keep eating as long as those environmental cues are present,” said study author David Neal.

“People believe their eating behavior is largely activated by how food tastes. Nobody likes cold, spongy, week-old popcorn,” said co-researcher Wendy Wood. “But once we’ve formed an eating habit, we no longer care whether the food tastes good. We’ll eat exactly the same amount, whether it’s fresh or stale.”

“The results show just how powerful our environment can be in triggering unhealthy behavior,” Neal said. “Sometimes willpower and good intentions are not enough, and we need to trick our brains by controlling the environment instead.”

“It’s not always feasible for dieters to avoid or alter the environments in which they typically overeat,” Wood concluded. “More feasible, perhaps, is for dieters top actively disrupt the established patterns of how they eat through simple techniques, such as switching the hand they use to eat.”

Surfs Up! Tsunami To Devastate US
See-through critters get biologists excited