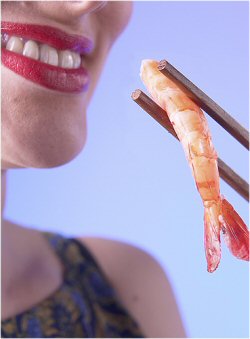 Are wine-buffs coaxed into buying their particular brand of poison just because that's what current trends dictate? Is an appreciation of haute cuisine no more than a learned social behavior? These are just two of the conclusions you could draw from recent research into taste perception. According to the researchers, one person's taste is unique from the next, with taste and odor perception being dramatically more complicated than our other sense perceptions. To understand why this is so, scientists have had to study taste at the genetic level, and in doing so have been rewarded with some surprising findings.

Before getting into the meat of the findings, it is necessary to savor and appreciate the complexities involved in taste. First, taste is really the combination and interaction of our taste buds, our nose and the somatosensory stimuli (indirect sensations as opposed to specific stimuli) that are normally present upon food intake. The convergence of these three receptors has been well documented, along with the understanding that taste perception is dependent upon an individual's brain composition. For a further indication of the intricacies involved, we need only compare the human genome's 347 olfactory genes with vision's paltry 4. Patrick MacLeod, president of the Institute of Taste and former director of the sensory neurobiology laboratory at the Ecole Pratique des Hautes Etudes, has found that at least half of those olfactory genes are polymorphous, meaning "they have a great potential of variation among themselves." It is taste's potentiality that gives credence to the claim that no two people will ever taste or smell the same odor the same way.

MacLeod claims that our understanding of taste has been meager until very recently. His findings, for example, dispel the myth that the human olfactory system is in some way rudimentary and unsophisticated, explaining that: "The human sensory system for odors has attained maximum sensitivity. A single molecule can provoke a response in a single cell that is then transmitted to the brain. As the molecule is the smallest unit possible, there can be no improvement."

At times during our past, humans have relied heavily upon taste perception to discern certain bitter tastes that might indicate the presence of toxins. This led to a number of studies that sought greater insight into our sensing of such tastes. The most famous genetically determined taste difference among people is the ability to taste PTC (phenylthiocarbamide) as bitter. PTC taste sensitivity varies tremendously among people; the threshold amount of PTC perceptible by individuals varies over a one thousand-fold difference in concentration. These different sensitivities form a bimodal distribution in almost every population examined, and this was interpreted as evidence that simple genetic differences, possibly involving only a single gene, underlie the PTC perceptual phenotype.

Other recent studies exploring the relationship between genetics and taste support these findings. Monell Chemical Senses Center (MCSC) psychophysicist Paul Breslin, explains that: "Each human carries their own distinctive set of taste receptors which gives them a unique perception of how foods and medicines taste." He adds further that his team's study: "shows that a single gene codes for multiple forms of a taste receptor, with each form having a differing sensitivity to taste compounds." Breslin's study was steered toward focusing on bitter taste reception because this is one of our oldest receptors, and: "a person's perceptual sensitivity to these bitter tasting compounds corresponds strikingly well with their genetically-determined receptor sensitivity," explains Breslin.

The MCSC study suggests that our unique genetic makeup determines what we can and cannot taste or smell. The existence of both bitter "tasters" and "non-tasters" has made scientists curious for more answers. Breslin comments, "From a human evolutionary perspective, we want to understand how and why both tasters and non-tasters evolved and were maintained in the gene pool. Usually when we see a trait like this, there is a biological advantage to maintaining the variation. We're wondering what that could be."

The most intuitive answer, if one were to speculate, might be that learning to distinguish certain toxic tastes was necessary for the survival of the human race. Perhaps analogous to the way in which we have different blood groups that would protect at least some of the species from complete eradication due to a particularly virulent virus. Making this assumption, it would follow that only some people among any given clan would have been naturally adept at distinguishing certain toxins through taste. It's possible, then, that this evolutionary process also worked at a more localized cooperative level to ensure the survival of a clan. If this is the case, there seems to be little difference between a clan's bio-toxicity classes and today's wine and food connoisseur's own recommendations that influence the palates of many guzzlers and gorgers. And let's face it; without this kind of uniformity the wine, food and cosmetics industries would be in a right state.

MacLeod is also fascinated by descriptions of smells, as their ephemeral and amorphous qualities seem to confound us. Our accounts are "impoverished", says MacLeod. When a receptor cell sends that electric message, the brain forms a representation, an arbitrary set of symbols that is unique to that person but consistent through time as a memory. So when we talk about the smells we perceive, our words form a "representation of a representation." So taste, while unique, is also short lived and subjectively defined. But who can really blame us for being poetic about something so indefinable as taste. It would be hard to imagine anyone preferring the clinical description of taste processes to that of the lyrical banter synonymous with the connoisseur. Take these two contrasting descriptions, for example:

"The wine was of a light ruby color, with a rich viscous texture hanging heavily against the walls of the glass. The wine possessed intense and rich aromas of raspberry, plum and blueberry notes enhanced by subtle nuances of earthy spices and chocolate"

"The catalog of chemical trigminal stimuli includes high concentrations of tastants, alcohols and other organic molecules, such as piperine from black pepper and capsaicin from chili pepper. The conscious perceptions elicited by these compounds vary from pungent to burning or noxious sensations. Other trigminal sensations result in mild tingling or prickling. Another trigminal sensation, the astringent sensation, may be described as a long-lasting puckering, shrinking and drying sensation on the tongue and oral mucosa and may be related to several compounds, such as [tannic acid] and alcohol."

It seems as a species we have grown to like, rather than fear, bitter tasting foods, an observation that strongly supports the finding that taste is a learned trait rather than an innate one. This perhaps explains MacLeod's rather surprising conjecture that there are no intrinsically bad smells. Apparently, we don't like the smell of a rotten egg, excrement, or skunks because we have been conditioned not to like them. This may explain at least one thing about ourselves; do we actually learn to appreciate the odor of our own flatulence, as opposed to those of other people, because we have no choice in the matter?