You are here: Home › Medicine › News › Gene therapy painkiller gets body to produce its own pain relief drugs
By Will Parker on April 12, 2011 in Medicine, News 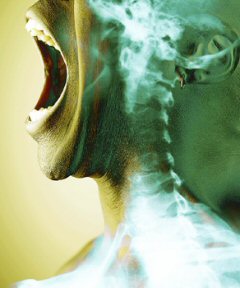 University of Michigan scientists running a human trial of the first ever gene therapy treatment for pain relief say that the virus-based vector which triggers the expression of a naturally occurring opioid appears to provide substantial pain relief.

Their study, published in the Annals of Neurology, used a novel human-grade vector agent known as NP2. The researchers said that NP2 is a gene transfer vector that expresses the naturally-occurring opioid peptide enkephalin.

In preclinical work in animals, researcher David Fink had demonstrated that injection of NP2 into the skin reduces pain in models of pain caused by nerve damage, inflammation, or cancer. In the clinical trial, 10 patients with unrelenting pain caused by cancer were injected with the gene transfer agent in the area of skin related to the location of pain.

“The concept underlying this therapeutic approach is that injection of NP2 into the skin results in uptake into the nervous system and the production and release of a pain-relieving chemical in a controlled site in the pain pathway,” explained Fink. “In the study, patients who received the low dose of vector showed little reduction in pain; patients receiving the higher doses showed a greater than 80 percent reduction in pain over the course of 4 weeks following treatment.”

Fink’s laboratory has been working on the use of modified herpes simplex virus-based vectors that are taken up by sensory nerves following skin injection to develop therapies for diseases of the nervous system for more than 20 years.

The recombinant replication defective HSV approach represents a platform technology – a nerve targeting drug delivery system – that can be used to deliver and express any one of a number of genes in the nervous system.

“This is an example of translational research in which we have moved from laboratory bench studies through animal models into new treatment that we are testing patients. There was no placebo control in this phase 1 study, but the apparent dose-dependent pain relief was encouraging to us,” Fink noted. A phase 2 trial to compare NP2 to a placebo control has already been initiated.

Altered Fates: Gene Therapy and the Retooling of Human Life by Lyon, J Book The

The Gene Therapy Plan: Taking Control of Your Genetic Destiny with Diet and Life

The Gene Therapy Plan: Taking Control of Your Genetic Destiny with Diet and Life

The Gene Therapy Plan: Taking Control of Your Genetic Destiny with Diet and...