You are here: Home › Health › Genetics › News › Breeder or worker? Scientists search for the genes that drive societies
By Will Parker on February 2, 2011 in Genetics, News 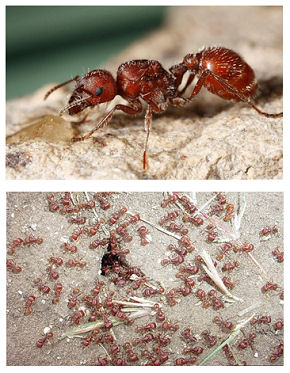 In order understand the evolution of complex societies; researchers are sequencing the genomes of social insects to decipher which genes might be responsible for the division of labor and reproduction, two crucial characteristics that are important to the evolution of social structure. Published in theProceedings of the National Academy of Sciences, the study focuses on several species of ants, including the red harvester ant (Pogonomyrmex barbatus).

The researchers believe their findings will help our understanding of how interacting developmental processes give rise to the emergent properties of organisms. “Having multiple independently evolved social genomes helps us to better understand which genes are involved in crucial social traits, because those should be highly conserved,” researcher Juergen Gadau said.

Results from Gadau’s study reveal that compared to other insects; the red harvester ant genome has significantly more genes associated with the sense of smell, as well as detection and metabolism of chemical signals. This is consistent with the fact that ants use chemical signals to communicate.

Another difference appears in the genes of the ant’s immune system. Previously, scientists hypothesized that ants may have evolved novel immune responses or specialized behaviors to avoid disease outbreaks within their dense populations. These results indicate the former may be a distinct possibility.

“The diversity in social structure between the different ants sequenced will allow us to search for the genetic basis and the architecture underlying the observed social diversity in ants,” explained Gadau, from Arizona State University. “A comparison with bees, a completely independent evolutionary lineage, will give us an opportunity to test whether there are multiple ways how a genome can become a sociogenome.”

The finding implies that, although the genes themselves are present in both worker and queen ants, when and where the genes are expressed is highly regulated and heritable from one generation to the next. “Everything we can learn about epigenetic modifications will probably have major implications for human health since these mechanisms are thought to be critical in the development of complex diseases of humans, such as mental illnesses and diabetes,” said Gadau.