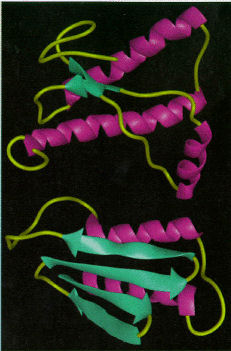 In a startling new study, scientists have shown for the first time that abnormal prions – fragments of infectious protein that can cause fatal neurodegenerative diseases such as Creutzfeldt-Jakob disease – can erupt from healthy brain tissue. The scientists, from The Scripps Research Institute in Florida and the University College London, detail their research in the latest edition of Proceedings of the National Academy of Sciences.

The catalyst used in the study was a simple steel wire. Previous research showed that prions bind readily to these types of surfaces and can initiate infection with remarkable efficiency. Surprisingly, according to the new research, wires coated with uninfected brain homogenate could also initiate prion disease in cell culture, which was transmissible to mice.

“Prion diseases such as sporadic Creutzfeldt-Jakob disease in humans or atypical bovine spongiform encephalopathy, a form of mad cow disease, occur rarely and at random,” said study co-leader Charles Weissmann, of Scripps Florida’s Department of Infectology. “It has been proposed that these events reflect rare, spontaneous formation of prions in brain. Our study offers experimental proof that prions can in fact originate spontaneously, and shows that this event is promoted by contact with steel surfaces.”

Infectious prions, which are composed solely of protein, are classified by distinct strains, originally characterized by their incubation time and the disease they cause. These toxic prions have the ability to reproduce, despite the fact that they contain no nucleic acid genome. Mammalian cells normally produce harmless cellular prion protein (PrPC). Following prion infection, the abnormal or misfolded prion protein (PrPSc) converts PrPC into a likeness of itself, by causing it to change its conformation or shape. The end-stage consists of large aggregates of these misfolded proteins, which cause massive tissue and cell damage.

In the new study, the scientists used the Scrapie Cell Assay, a test originally created by Weissmann that is highly sensitive to minute quantities of prions. Using the Scrapie Cell Assay to measure infectivity of prion-coated wires, the team observed several unexpected instances of infectious prions in control groups where metal wires had been exposed only to uninfected normal mouse brain tissue.

Weissmann stressed that the phenomenon was investigated in rigorous and exhaustive control experiments specifically designed to exclude prion contamination. He and his co-researchers in London found that when normal prion protein is coated onto steel wires and brought into contact with cultured cells, a small but significant proportion of the coated wires cause prion infection of the cells – and when transferred to mice, they continue to spawn the disease.

Weissmann noted that an alternative interpretation of the results is that infectious prions are naturally present in the brain at levels not detectable by conventional methods, and are normally destroyed at the same rate they are created. If that is the case, he noted, metal surfaces could be acting to concentrate the infectious prions to the extent that they became measurable by the team’s testing methods.

HIV preventative effect too small to justify circumcision, claims new study
Primates on The Pill find it hard to pull