You are here: Home › News › Worry Fuel › Mad cow disease airborne
By Will Parker on January 14, 2011 in News, Worry Fuel 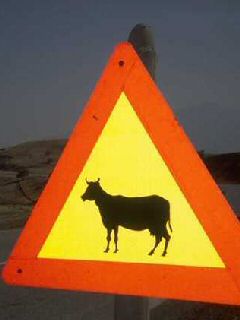 University of Zurich researchers have discovered that prions – the infectious proteins that can causeCreutzfeldt-Jakob (mad cow) disease – can be transmitted through the air. Creutzfeldt-Jakob disease is characterized by a progressive and invariably lethal breakdown of brain cells. The surprising finding will likely mean a whole new raft of precautionary measures for scientific labs, slaughterhouses and animal feed plants.

It was previously known that prions could be transmitted through contaminated surgical instruments and blood transfusions but prions were not generally considered to be airborne until now. Details of how inhalation of prion-tainted aerosols induced disease are published in the journal PLoS Pathogens.

In the new study, the researchers exposed mice to prion-containing aerosols which induced disease. Exposure to the aerosols for one minute was sufficient to induce disease in 100 percent of the mice. The researchers note that the longer the exposure, the shorter the incubation time in the recipient mice, after which they developed the clinical signs of a prion disease.

Interestingly, the prions appeared to transfer from the airways and colonize the brain directly, since various immune system defects – known from previous experiments to prevent the passage of prions from the gut to the brain – did not prevent infection.

The precautionary measures against prion infections have not typically included stringent protection against aerosols. Study leader Adriano Aguzzi recommends precautionary measures to minimize the risk of a prion infection in scientific laboratories, slaughterhouses and animal feed plants but he also emphasizes that the findings stem from laboratory conditions and that Creutzfeldt-Jakob patients do not exhale infectious prions.