You are here: Home › News › Tantalizing hint of dark matter’s existence
By Will Parker on December 31, 2009 in News 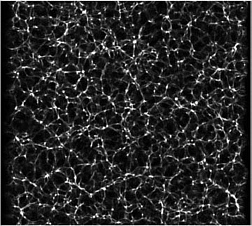 Swiss astronomer Fritz Zwicky first suggested that a distant cluster of galaxies would fall apart were it not for the gravitational pull of some invisible cosmic substance, and ever since then astronomers have been trying to find evidence for this mysterious “dark matter.” Now, an international team of scientists conducting experiments in a disused Minnesota iron ore mine have announced that they have detected two weakly-interacting massive particles (WIMPs) – the very stuff that is thought to make up dark matter.

Physicists expect WIMPs to have masses comparable to, or perhaps heavier than, the masses of atomic nuclei. Although such WIMPs would rarely interact with normal matter, they could occasionally scatter from an atomic nucleus like billiard balls, leaving a small trace of residual energy that might be detectable under the right conditions.

The Cryogenic Dark Matter Search (CDMS) experiment, located half-a-mile underground at the Soudan mine in northern Minnesota, uses 30 detectors (cooled to temperatures approaching absolute zero) made of germanium and silicon in an attempt to detect such WIMP scatters. The CDMS has been operating at Soudan since 2003.

CDMS leader, Dan Bauer, explained that particle interactions in the crystalline detectors deposit energy in the form of heat and in the form of charges that move in an applied electric field. Special sensors detect these signals, which are then amplified and recorded by computer. A comparison of the size and relative timing of these two signals (heat and charge) allows the experimenters to tell whether the particle that interacted in the crystal was a WIMP – or one of the numerous known particles that come either from radioactive decays or from space in the form of cosmic rays. Filtering out such background particles is accomplished with shielding and the half-mile of rock above the experiment.

The detectors themselves are “tuned” by exposure to sources of two types of radiation: gamma rays and neutrons. This calibration data is carefully studied to see how well a WIMP-like signal can be seen over background interactions. The expectation is that no more than one background event would be expected to be visible in the region of the data where WIMPs should appear. Since background and signal regions overlap, achievement of this low background level required the researchers to throw out roughly 2/3 of the data that might contain WIMPs, because these data would contain too many background events.

The latest results, produced from a data set taken in 2007-2008, included two events with characteristics consistent with those expected from WIMPs. However, Bauer cautions that there is also a chance that both events could be due to background particles.

Bauer said his team hopes to take advantage of new detector developments as a way to increase the CDMS’ sensitivity to WIMPs. By the summer of 2010, he hopes to have about three times more germanium nuclei sitting near absolute zero, patiently waiting for WIMPs to come along and provide the perfect billiard ball shots that will offer compelling evidence for the direct detection of dark matter.