You are here: Home › News › Truth-in-spam-shock: penis enlargement possible
By Will Parker on March 3, 2009 in News 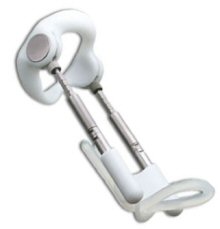 Contrary to established medical wisdom, a new European study has found that the mechanical devices known as penile extenders do actually increase the length of the human penis. The devices work by applying a constant stretching force on the penis. The study, published in the journal BJU International, was conducted by urologists from the University of Turin who noted that while the extenders could increase penile length, increases in girth were not recorded.

The subject group used for the study consisted of fifteen men who were shown how to use the penile extender for 4 hours per day. Penile dimensions were measured at baseline and thereafter at 1, 3, 6 and 12 month intervals.

Interestingly, and contrary to perceived wisdom on the subject of non-surgical penis enlargement, after 6 months the researchers found that the mean gain in length was significant – at 2.3 and 1.7 cm (0.9 and 0.65 inches) for the flaccid and stretched penis, respectively.

The researchers concluded their findings by noting that “penile extenders should be regarded as a minimally invasive and effective treatment option to elongate the penile shaft in patients seeking treatment for a short penis.”

The new study builds on earlier research carried out by the Rush University Medical Center in Chicago that established positive results from a study into the use of mechanical extenders to treat curvature of the penis (Peyronie’s disease). That study found that “significant (10-45 degrees) improvement in curvatures is achievable” and that extender use was an effective first option for treating Peyronie’s.