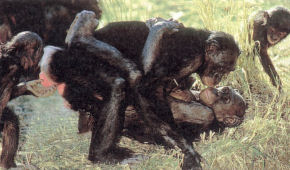 Unlike their chimpanzee relatives, bonobos enjoy a make-love-not-war image. But a new study in Current Biology offers the first direct evidence of wild bonobos hunting and eating the young of other primate species. “These findings are particularly relevant for the discussion about male dominance and bonding, aggression and hunting – a domain that was thought to separate chimpanzees and bonobos,” said researcher Gottfried Hohmann of the Max-Planck-Institute for Evolutionary Anthropology.

Hohmann’s study notes that unlike groups of chimps, in bonobo populations females enjoy a higher social status than males. “In chimpanzees, male-dominance is associated with physical violence, hunting, and meat consumption. By inference, the lack of male dominance and physical violence is often used to explain the relative absence of hunting and meat eating in bonobos. Our observations suggest that, in contrast to previous assumptions, these behaviors may persist in societies with different social relations,” he explained.

Bonobos live only in the lowland forest south of the river Congo, and, along with chimpanzees, they are humans’ closest relatives. Bonobos are perhaps best known for their promiscuity: sexual acts both within and between the sexes are a common means of greeting, resolving conflicts, or reconciling after conflicts.

The researchers made the discovery that these free-loving primates also hunt and kill other primates while they were studying a bonobo population living in LuiKotale, Salonga National Park, in the Democratic Republic of Congo. Although Hohmann’s team did have prior evidence for monkey hunting by bonobos, it came exclusively from indirect studies of fresh fecal samples. But in the absence of direct behavioral observations, it was not entirely clear whether the bonobos had hunted the primate victim themselves, or whether they had taken it from another predator.