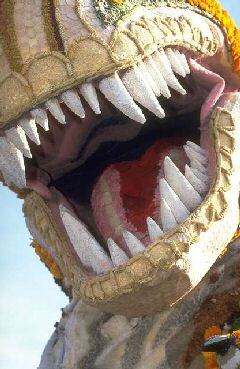 The cinematic cliché of two huge dinosaurs battling to the death may be nothing but fantasy if German scientists are correct in their assessment that large carnivorous dinosaurs were opportunistic hunters who picked on much smaller prey.

“Unlike their adult and well-armed relatives these young animals hardly posed any risk to the predators,” says Rauhut. “And their tender bones would have added important minerals to a theropod’s diet. Animals such as T-rex are often seen as the perfect ‘killing machines’ with extremely powerful bites, which were able to bring down even the largest possible prey. But the very few fossils that reflect the hunt of predatory dinosaurs on large herbivores tell a tale of failure – the prey either got away, or both prey and predator were killed.”

The researchers say that the evidence for the diet of predatory dinosaurs – stomach contents and coprolites – shows that juveniles or much smaller prey species were ingested and the latter were swallowed whole. “Even modern predators prefer old and sick animals or inexperienced young individuals,” states Hone. “These are an easy prey to bring down and the risk of injury for the predator is much lower. This strategy was probably the same in dinosaurs.”

Modern-day predator-prey interactions reveal an additional benefit of young prey: Crocodiles, the closest living relatives of dinosaurs, have extremely strong acids in their stomachs. They can completely dissolve the poorly ossified bones of young animals which adds important nutrients to the reptiles’ diet. The fossil finds of juvenile dinosaurs that have been swallowed whole by theropods support the idea that dinosaurs might have profited from this as well.

Missing fossils lend even more plausibility, according to Rauhut. “Finds of dinosaur nesting sites indicate that they contained large numbers of eggs which should have resulted in a high number of offspring. But little of this is reflected in the fossil record. Juvenile dinosaurs are surprisingly rare – maybe because many of them have been eaten by predators. Hopefully there will soon be more evidence to help us really understand the theropods’ hunting behavior,” he noted in conclusion.