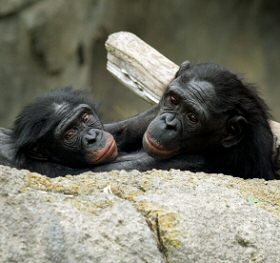 Chimpanzees and bonobos are both close cousins to humans, but it’s usually been thought that chimps outdo bonobos in the intelligence stakes. While chimps have been observed hunting cooperatively and using tools to gather food, the poor old bonobos have mainly been noted for their enthusiastic and diverse sexual behaviors. But thanks to their free-loving lifestyle, bonobos have developed a trait not evident in chimps; that of social tolerance, which researchers think may give them an advantage in certain situations.

Even though chimpanzees exhibit strong cooperative hunting behavior in the wild, a research team from Max Planck Institute for Evolutionary Anthropology and Duke University has found that bonobos are more successful than chimpanzees at cooperating to retrieve food. The findings suggest that some social tendencies or emotions that are adaptive under certain circumstances – such as aggression during competition for mates – can hinder the potential for problem solving under other circumstances, such as sharing of a food resource.

The researchers sought to investigate two hypotheses. The first, the so-called “emotional reactivity hypothesis,” predicts that bonobos will cooperate more successfully, because past observations have indicated that they are more tolerant of other individuals than are chimpanzees. In contrast, the second hypothesis, the “hunting hypothesis,” predicts that chimpanzees will cooperate more successfully, thanks to their known ability to cooperatively hunt in the wild.

In a related set of experiments, bonobos were found to be better than chimpanzees at cooperating to retrieve food that was not easily divisible – i.e. food that might be easily monopolized by one of the two individuals.

These observations were consistent with the “emotional reactivity hypothesis” and run counter to the “hunting hypothesis,” which predicts that chimpanzees – owing to their cooperative hunting skills – would outperform bonobos in cooperative feeding even when food wasn’t easily divisible. The findings suggest that one way in which the skill of social problem solving can arise is through evolutionary selection on emotional systems, such as those controlling fear and aggression.

Is Your Carpet Making You Fat?
Ancient Man Built For Fighting