You are here: Home › News › Climate “Tipping Points” Identified
By Will Parker on February 5, 2008 in News 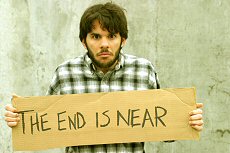 The latest issue of the Proceedings of the National Academy of Sciences describes work by an international team of researchers in identifying small climatic changes that could have large long-term consequences on human and ecological systems. “Society may be lulled into a false sense of security by smooth projections of global change,” the report notes. But, they argue, in some regions anthropogenic forcing on the climate system could kick start abrupt and potentially irreversible changes. For these sub-systems the researchers use the term “tipping element”.

Drawing on a workshop of 36 leading climate scientists in October 2005 at the British Embassy, Berlin, Germany, a further elicitation of 52 experts in the field, and a review of the pertinent literature, the authors compiled a short-list of nine potential tipping elements.

The tipping points, that have been ranked according to likely severity, are: