You are here: Home › News › Wrong Genes And Coffee’s A Heart Stopper
By Will Parker on March 8, 2006 in News 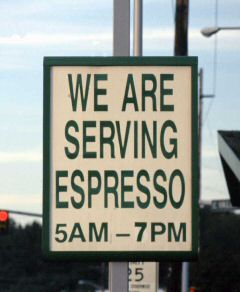 After all, a few cups of Joe aren’t worth your health are they (well, actually�)? As it turns out, some new findings concerning caffeine and its effects on human metabolism have just been made public by Ahmed El-Sohemy, of the University of Toronto.

Caffeine is predominantly metabolized in the liver by an enzyme called cytochrome P450 1A2 (CYP1A2), but according to Sohemy’s study, published in the Journal of the American Medical Association, a genetic variation of this enzyme dictates the rate at which caffeine is metabolized.

El-Sohemy’s team set about devising an experiment to discover whether variations of the CYP1A2 enzyme are linked to a greater risk of non-fatal MI. Two-thousand patients with a first acute non-fatal heart attack and an equal number of controls were scrutinized between 1994 and 2004. Determining the subjects’ genotypes was necessary for the experiment, as was a food frequency questionnaire used to track the quantities of caffeinated coffee consumed by the participants.

“We found that increased coffee intake is associated with an increased risk of non-fatal MI. The association between coffee and MI was found only among individuals with the slow CYP1A2*1F allele, which impairs caffeine metabolism, suggesting that caffeine plays a role in the association,” the authors concluded.