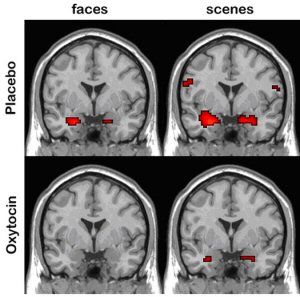 A brain imaging study at the National Institute of Mental Health (NIMH) has discovered that the fear-processing circuitry in the human brain appears to be short-circuited by the brain chemical oxytocin, sometimes referred to as the “trust” hormone.

The scans of oxytocin’s effects on the human brain reveal that it quells the brain’s fear hub, the amygdala (and its associated brainstem relay stations), in response to fearful stimuli. The work could yield new approaches to treating diseases thought to involve amygdala dysfunction and social fear, such as social phobia, autism, and possibly schizophrenia, suggests the study.

The new study was inspired by Swiss scientists who last summer reported that oxytocin increased trust in humans. Wanting to explore these effects further, NIMH researcher Andreas Meyer-Lindenberg and colleagues embarked on a brain imaging study that would explore how oxytocin works on the brain’s circuitry. Having just discovered decreased amygdala activity in response to social stimuli in people with a rare genetic brain disorder that rendered them overly trusting of others, Meyer-Lindenberg hypothesized that oxytocin boosts trust by suppressing the amygdala and its fear-processing circuitry.

The experiment he designed to test his theory involved 15 healthy men sniffing either oxytocin or a placebo prior to undergoing a functional magnetic resonance imaging (fMRI) scan. While in the scanner, the men performed tasks known to activate the amygdala – matching angry or fearful faces and threatening scenes.

Meyer-Lindenberg found that the threatening pictures triggered strong activation of the amygdala during the placebo scan, but markedly less activity following oxytocin. The difference was especially pronounced in response to threatening faces, suggesting a pivotal role for oxytocin in regulating social fear. In addition, oxytocin dampened the amygdala’s communication with sites in the upper brainstem that telegraph the fear response.

The researchers believe their findings, appearing in Neuroscience, could have application in treating various mental disorders. “Because increased amygdala activation has been associated with social fear in social phobia, genetic risk for anxiety and depression, and possibly with social fear in autism assessed during faces processing, this dual mode of action of oxytocin in humans suggests a potentially powerful treatment approach toward socially relevant fear,” said Meyer-Lindenberg.

"Adventure into Fear with the Man-Thing" 18, 1973: Marvel Comics Group comic